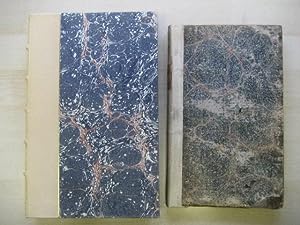 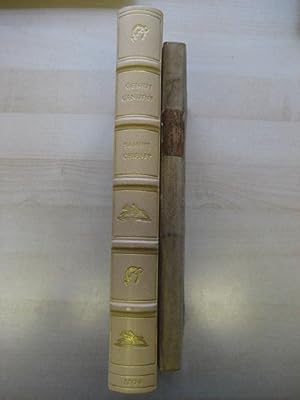 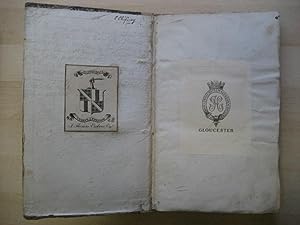 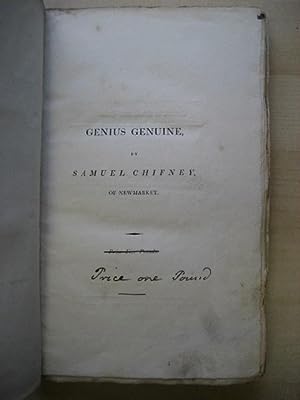 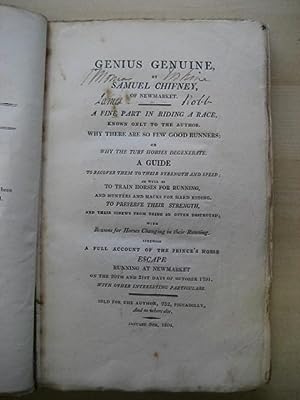 Chifney (Samuel) GENIUS GENUINE.a fine part in riding a race, first edition ?, vii. 170 pp., SIGNED BY E CHIFNEY on inside front cover, signed by Thomas Erskine and James Robb on title page, book plates of J Thomas Erskine on inside front cover and Prince Henry, Duke of Gloucester on end paper, contemporary notes in pencil concerning the story of Chifney and Escape, see below, original price of ú5 crossed out in ink and replaced with Price One Pound, original marbled boards, spine with paper label, edges uncut, preserved in modern cream calf-backed marbled drop backed case, spine gilt with racing motifs, Sold for the Author, 232 Piccadilly, and nowhere else, 1804. The events described in this book took place in 1791 when Samuel Chifney, who had been retained by the Prince of Wales to be his rider for life at a salary of ú200 per annum, lost a race he was expected to win on the Prince's best horse Escape. The following day on the same horse and against the same field he won at considerably longer odds. Although his explanation was accepted by the Prince it was not by the Jockey Club. This book is an attempt to exonerate himself. The date of publication is of some doubt with some authorities claiming it to have been published as early as 1795. The note on the the reverse of the half title states that "From unforeseen circumstances the author has been prevented publishing this Book at the time intended." The book describes events upto 1803 so it would appear strange if indeed the book had been published in 1795. Size: 8vo. N░ de ref. de la librerÝa 004700

The Old Hall Bookshop was established in 1977 by John and Lady Juliet Townsend. The Old Hall is a very fine 18th century house in the centre of Brackley, a pleasant market town about 18 miles north of Oxford. The shop has a large stock of antiquarian, secondhand, new books and maps covering a wide range of interests and prices. We welcome visitors and trade customers. Parking is easy in the Market Square. Disabled access available. Opening hours: We are open every day except Sunday and Bank holidays, from 9.30am to 5.30pm. We attend a number of Book Fairs each year.


Payment required in advance. All payments in sterling - we accept most major credit cards, bank drafts, postal orders, cheques (drawn on UK accounts), or cash if you would like to collect from the shop.

If not entirely happy with your purchase please return within 14 days for a full refund minus postage costs.


Orders usually ship within 2 business days. Shipping costs are based on books weighing 2.2 LB, or 1 KG and shipped in the UK. If your book order is heavy or oversized, or you require shipping outside the UK, we will contact you to let you know if any extra charges apply.