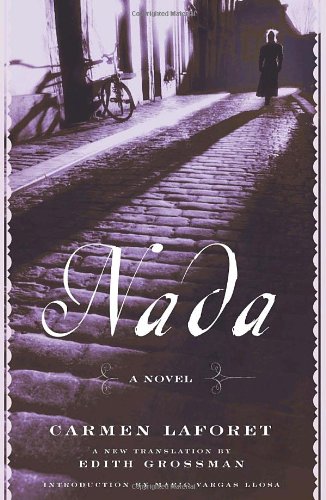 In Barcelona, in the wake of the Spanish Civil War, Andrea, a young university student, moves into a strange, gothic house inhabited by a volatile array of aunts and uncles in order to attend college and finds herself coping with her cruelly sensual musician uncle Romßn, his violent brother Juan, her overbearing and religious aunt Angustias, and aunt Gloria, who supports the family with her secret gambling. 10,000 first printing.

Carmen Laforet (1921-2004) had a profound impact on Spanish literature. Her debut novel, Nada, was awarded the first Premio Nadal in 1944. She is also wrote a collection of short stories and five other novels, including Al doblar la esquina (Around the Block) and La mujer nueva (The New Woman), which won Spain’s National Prize for Literature in 1955.

Edith Grossman is the distinguished translator of works by many other Spanish and Latin American writers, including Miguel de Cervantes, Gabriel GarcÝa Mßrquez, Mario Vargas Llosa, and ┴lvaro Mutis. She is the recipient of two Translation of the Year awards from the American Literary Translators Association, and the 2006 PEN Ralph Manheim Medal for Translation. She lives in New York City.

Mario Vargas Llosa is one of Latin America’s preeminent fiction writers and essayists. His novels include The Feast of the Goat, The Notebooks of Don Rigoberto, and Aunt Julia and the Scriptwriter.