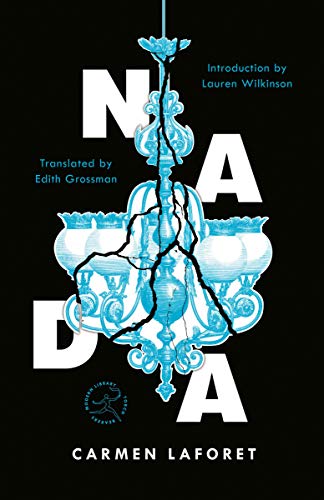 "That this complex, mature and wise novel was written by someone in her early 20s is extraordinary. . . . But after six decades, this first novel has lost none of its power and originality, and we are fortunate to have it in this fine translation."--The Washington Post, chosen as a Washington Post Best Book of the Year

"Laforet vividly conveys the strangeness of Barcelona in the 1940s, a city that has survived civil war only to find itself muted by Franco's dictatorship. . . . The spirit of sly resistance that Laforet's novel expresses, its heroine's determination to escape provincial poverty and to immerse herself in 'lights, noises, the entire tide of life, ' has lost none of its power of persuasion."--The New York Times Book Review

"A brilliantly subtle book whose power lies in what goes unsaid . . . Nada is a skillfully written, multifaceted novel, and its eerie relevance to today's political climate and social attitudes is difficult to ignore."--The San Francisco Chronicle "Nada does indeeed recall Sartre and Camus, but it is fresher and more vibrant than either, and with its call to intuition and feelings rather than intellect, it cuts deeper. . . . [A] mesmerizing new translation . . . a beautiful evocation of the tidal wave of late adolescent feeling . . . [Laforet] wrote Nada when she was only 23, yet the book resonates with frightening maturity, sadness and depth. . . . A work of genius."--Los Angeles Times

"[Nada] has been given new life by acclaimed translator Grossman. . . . Andrea's narration is gorgeously expressive, rippling with emotion and meaning . . . fans of European lit will welcome this Spanish Gothic to the States with open arms and a half-exasperated, "What took you so long?"--Publisher's Weekly (starred review)

"Nada is neither moralist, nor prolix, unlike most other Spanish literature of the time and before. This is a modern voice, philosophically and stylistically, talking to us in freedom from the darkest hours of the victory of fascism . . . remarkably sophisticated."--The Independent

"Edith Grossman's translation makes the rich, dense descriptions . . . sound perfectly natural in English; not a beat is missed, not an adjective misplaced. Let us hope that her fine, readable version will enable Nada to achieve, in the English-reading world, the perennial popularity of a great twentieth-century novel."--TLS Reseńa del editor:

One of the most important literary works of post-civil war Pain, Nada is the semiautobiographical story of an orphaned young woman who leaves her small town to attend university in war-ravaged Barcelona.

Descripción Paperback. Condición: New. Reprint. Language: English. Brand new Book. Renowned as Spain's The Catcher in the Rye, a passionate coming-of-age novel that follows a rebellious young woman as she uncovers her family's secrets in chaotic, polarized post-Civil War Barcelona "A work of genius [that recalls] Sartre and Camus, but it is fresher and more vibrant than either."--Los Angeles Times Book Review Andrea, an eighteen-year-old orphan, moves from her small town to Barcelona to attend university. Living in genteel squalor with her volatile relatives in a mysterious house on Calle de Aribau, Andrea relies on her wealthy, beautiful bohemian friend Ena to prove that normal life exists beyond the gothic dwelling she calls home. In one year, as her innocence melts away, Andrea learns the truth about her overbearing and religious aunt Angustias, her cruelly sensual, musically gifted uncle Román and his violent brother Juan, and her lovely aunt Gloria, who supports the family with furtive gambling expeditions. She also learns the truth about Ena--and why her friendship goes hand in hand with her interest in Andrea's family. Peppered with dark humor, energy, and hope, Carmen Laforet's stunning autobiographical classic is the story of a young woman who endures the harsh realities of her postwar society, emerging wiser and stronger, and with a bright future ahead of her. Nş de ref. del artículo: BZE9780812975833