Artículos relacionados a Narrative of the Life of Frederick Douglass: Authoritative... 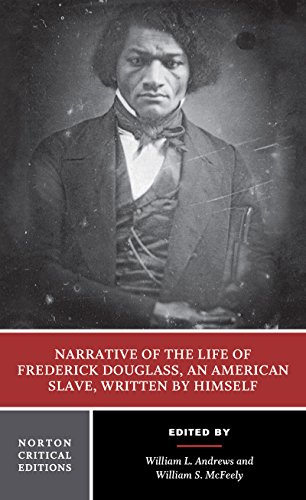 In addition to its far-reaching impact on the antislavery movement in the United States and abroad, Douglass's fugitive slave narrative won recognition for its literary excellence, which has since earned it a place among the classics of nineteenth-century American autobiography. This Norton Critical Edition reprints the 1845 first edition of Douglass's compelling work. Explanatory annotations accompany the text. A rich selection of "Contexts" provides the reader with contemporary perspectives. Included are the little-known preface that Douglass wrote in 1846 for the second Irish edition; a public exchange of letters between A. C. C. Thompson, a former slaveholder, and Douglass; three autobiographical portraits of Douglass's parents; Douglass's account of his escape from slavery, which he chose not to include in the 1845 Narrative; samples of Douglass's use of his slave experience in two of his most influential antislavery speeches; and reminiscences by James Monroe Gregory and Elizabeth Cady Stanton of Douglass as both orator and friend. "Criticism" collects six essential assessments of the Narrative's historical and literary aspects, by William S. McFeely, Peter Ripley, Robert B. Stepto, William L. Andrews, Houston A. Baker, Jr., and Deborah E. McDowell. A Chronology and a Selected Bibliography are included.

William L. Andrews is E. Maynard Adams Professor of English at the University of North Carolina at Chapel Hill. He is general editor of Wisconsin Studies in Autobiography and The Literature of the American South: A Norton Anthology, and co-editor of The Oxford Companion to African American Literature and The Norton Anthology of African American Literature. Other works include the Norton Critical Edition of Up From Slavery; The Literary Career of Charles W. Chesnutt; To Tell a Free Story: The First Century of Afro- American Autobiography, 1760-1865; Sisters of the Spirit; The Curse of Caste by Julia C. Collins; Life of William Grimes, the Runaway Slave; and Slave Narratives after Slavery. William S. McFeely is Abraham Baldwin Professor of the Humanities, Emeritus, at the University of Georgia. He is the author of Yankee Stepfather: General O. O. Howard and the Freedmen; Grant: A Biography, for which he was awarded the Pulitzer Prize and the Parkman Prize; Frederick Douglass, which received the Lincoln Prize; Sapelo's People: A Long Walk into Freedom; and Proximity to Death.

1. NARRATIVE OF THE LIFE OF FREDERI

2. Narrative of the Life of Frederick Douglass, an American Slave, Written by Himself (Norton Critical Editions)