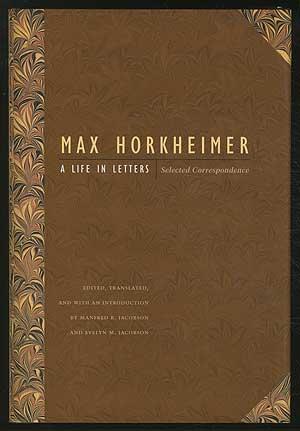 A Life in Letters: Selected Correspondence

Reseña del editor: One of the central figures in modern thought, Max Horkheimer (1895-1973) was the director of the Institute of Social Research at the University of Frankfurt and guided the activities of the Frankfurt School from its origins in Germany through its exile in the United States during World War II. The Frankfurt School writers developed what came to be known as Critical Theory, and anyone familiar with poststructuralist theory in the humanities and social sciences will recognize its indebtedness to the Frankfurt School. These letters show how Horkheimer's thought was influenced by and engaged with the historical events of the twentieth century, particularly the Holocaust and the Vietnam War. The letters trace the trajectory of his thought from an early optimism about the possibility of revolutionary change to a critique of orthodox Marxism as his faith in revolution was replaced by a commitment to the transformative power of education. These letters also convey the contours of Horkheimer's personal relationships and illustrate the connection of Horkheimer and the Frankfurt School to the work and thought of some of the most important figures in the intellectual life of the nineteenth and twentieth centuries, including Karl Marx, Thomas Mann, Sigmund Freud, Theodor Adorno, and Herbert Marcuse.

1. A Life in Letters: Selected Correspondence (Texts and Contexts)

2. A Life in Letters: Selected Correspondence (Texts and Contexts)

3. A Life in Letters: Selected Correspondence (Texts and Contexts)