Artículos relacionados a The Future of Architecture Frank Lloyd Wright 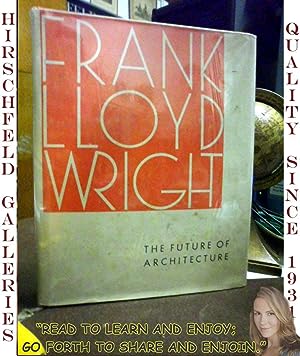 Yes, this 326 jumbo-sized page First Edition, being an increasingly well respected and energetically applauded offering it is proudly presented with great and well deserved hubris by Hirschfeld Galleries in BOTH the publishers original binding and original dustwrapper. The binding is full scarlet red cloth with bright gilt titling on spine. And this treasure is rock solid tight and clean, AAA and unbumped all the way save for miniscule scrapess at corners. The only other noticeable detraction and/or enhancement (depending on your taste) is the prestigous bookplate of Michael Julian Hirschfeld. The jacket is also AAA save for a faint smudge here and there. But not to worry or be sad, for said imperfection is made considerably less objectionable, since, on the very positive side of things, the jacket is now and forevermore protected from any future ambient abuse and resulting degradation by professionally fitted and applied yet instantly removable Brodart mylar. Frank Lloyd Wright (born Frank Lincoln Wright, June 8, 1867 - April 9, 1959) was an American architect, interior designer, writer and educator, who designed more than 1,000 projects, which resulted in more than 500 completed works. Wright promoted organic architecture (exemplified by Fallingwater), was a leader of the Prairie School movement of architecture (exemplified by the Robie House, the Westcott House, and the Darwin D. Martin House), and developed the concept of the Usonian home (exemplified by the Rosenbaum House). His work includes original and innovative examples of many different building types, including offices, churches, schools, skyscrapers, hotels, and museums. Wright also often designed many of the interior elements of his buildings, such as the furniture and stained glass. Wright authored 20 books and many articles, and was a popular lecturer in the United States and in Europe. His colorful personal life often made headlines, most notably for the 1914 fire and murders at his Taliesin studio. Already well-known during his lifetime, Wright was recognized in 1991 by the American Institute of Architects as "the greatest American architect of all time." Hirschfeld Galleries' offerings such as this one which take on a life of their own and speak so very loudly for themselves. Read to learn and enjoy; go forth to share and enjoin. Research, analysis, dissertation, lucubrations or just enjoyment, this is the one. Size: 4to - over 9ľ" - 12". N° de ref. de la librería 007608

Hirschfeld Galleries, Established in 1930, is a full-line used, collectible, rare, and antiquarian book dealer located in Saint Louis, Missouri. Our collection comprises over 100,000 items, collected over 5 generations. We specialize in fine bindings, first editions, private press, early printed, and incunabula. We are happy to consult to institutions, private collectors, and the trade. We can offer appraisals, rare book searches, and collection advice.


We accept payment in the form of US check, money order. We accept Visa or Mastercard, but for discounted items we prefer payment by check. If paid by credit card we will only ship to the BILLING ADDRESS for the credit card.

We require that all purchases over $100 be insured. Thank You.