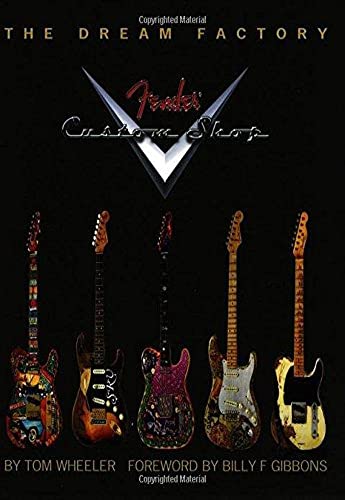 This third in a series of hardcover books joins the award-winning titles "The Stratocaster Chronicles" and "The Soul of Tone" by author/historian Tom Wheeler. "The Dream Factory" features hundreds of full-color photos of incredibly rare, collectible, and limited edition handcrafted guitars. In over 600 pages, learn the fascinating tale of the Fender Custom Shop and its illustrious artisans as only Tom Wheeler can tell it. It features: foreword by Billy F Gibbons; and, over 630 images illustrating the first master builders and their humble beginnings through the many changes up to present-day operations. It includes many one-of-a-kind custom guitar masterpieces and reproductions of acclaimed guitarists' instruments, such as Eric Clapton's Blackie, Jimi Hendrix's Monterey Strat, Stevie Ray Vaughan's No. 1, and many more. It is a must-have for all guitar enthusiasts! It includes unprecedented view inside one of the music industry's most creative and prolific custom instrument shops. It offers fascinating interviews and stories from the men and women who set the standard for guitar greatness. It features behind-the-scenes looks at how playable works of art are created.

TOM WHEELER was the editor in chief of Guitar Player magazine for ten years, founding editorial director of Bass Player magazine, and continued to provide a monthly column for Guitar Player for ten additional years. He has written many books, American Guitars: An Illustrated History, The Stratocaster Chronicles, and The Soul of Tone. He has also contributed to dozens of other books on guitar, as well as being interviewed by The New York Times, Chicago Tribune, The Wall Street Journal, National Public Radio, MTV, the BBC, and CNN. He is a consultant to the Smithsonian Institute and host of informational videos for Fender and Guild.