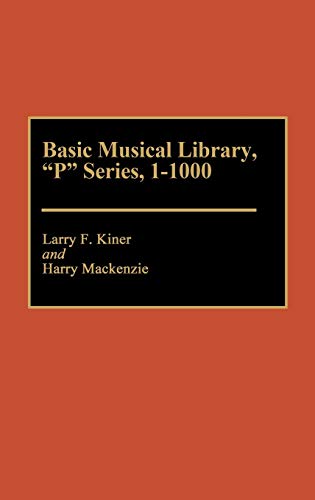 In 1943 the Armed Forces Radio Service began transmitting programs that linked the thousands of American military personnel and civilians stationed overseas to the United States. This definitive study provides discographical data for the first 1,000 recordings of the AFRS Basic Musical Library, P (Popular) Series. This series of recordings of popular, jazz, and classical music constituted a permanent music library at every military radio station and allowed AFRS personnel at the numerous broadcast facilities around the world to act as disc jockeys, playing the most popular and requested songs and artists for their audiences--principally American GIs. Some of the many orchestras and singers represented in the collection include Bing Crosby, Harry James, Count Basie, Cab Calloway, the Andrews Sisters, Frank Sinatra, and Peggy Lee. The sources of the recordings were variable and included commercial recordings (occasionally alternate takes) principally from Columbia, Decca, and Victor; radio broadcasts (often from dress rehearsals); concerts; and AFRS's own recording sessions. Larry F. Kiner and Harry Mackenzie have meticulously and comprehensively researched the AFRS files to produce this first complete listing of these recordings and their compilation is also the first to identify the many commercial record issues that have been derived from the series. Following the introduction that advises readers how to use the book and also explains its format and abbreviations, the 1,000-entry discography begins. Each entry lists the AFRS Basic Musical Library P Series catalog number; the matrix number; take number as shown on the ARFS label; song title; artist identification; running time in minutes; source of the take, including exact date and geographical location, when known; and size, speed and issue data. Two appendixes center on the most popular artists and most popular songs of the collection and two separate indexes list articles and songs to facilitate ease of location. Of special interest are the over three dozen label illustrations. This important source of information on American popular songs, artists, and recordings of the 1943 to 1947 period will be welcomed by musical scholars of the World War II era and by those with a penchant for American popular music.

We sell books with free shipping by traceable Air. Since 1960, we mainly have continued to specialize in bringing antiquarian books, academic western books and published materials, doctoral dissertations, microforms and electronic publications to its university and academic clients throughout Japan. We strive to be not the largest, but the "first and foremost" specialist firm in Japan.


All books are selling with our best price with free standard shipping, and with excellent packing.
We accept Visa/MC/AE/CB. If you wish to order books above $800.00, we can add other mayment opptions such Wire Transfer or Invoice for a temporary period of time. Please contact us before ordering. Also, if you are concerned about books condition, we are willing to send you some photos.