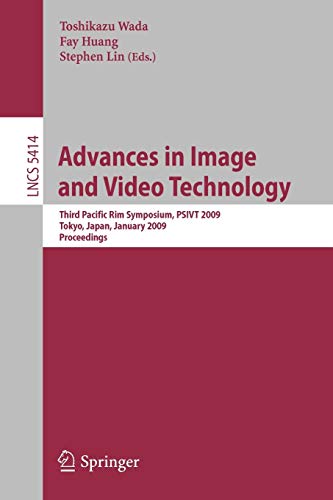 We welcome you to the Third Paci?c-Rim Symposium on Image and Video Technology (PSIVT 2009), sponsored by the National Institute of Informatics, MicrosoftResearch,and the Forumfor ImageInformaticsin Japan.PSIVT 2009 washeldinTokyo,Japan,duringJanuary13-16.Themainconferencecomprised eight major themes spanning the ?eld of image and video technology, namely, image sensors and multimedia hardware, graphics and visualization, image and video analysis, recognition and retrieval, multi-view imaging and processing, computer vision applications, video communications and networking, and m- timedia processing. To heighten interest and participation, PSIVT also included workshops, tutorials, demonstrations and invited talks, in addition to the tra- tional technical presentations. For the technical program of PSIVT 2009, a total of 247 paper submissions underwent a full review process. Each of these submissions was evaluated in a double-blind manner by a minimum of three reviewers. The review assignments were determined by a set of two to four Chairs for each of the eight themes. Final decisions were jointly made by the Theme Chairs, with some adjustments by the Program Chairs in an e?ort to balance the quality of papers among the themes and to emphasize novelty. Rejected papers with signi?cant discrepancies in review evaluations received consolidation reports explaining the decisions.

The Book Depository - bookdepository.com - is the UK's largest dedicated online bookseller offering the largest range of titles in the world, available for dispatch within 48 hours. Founded in 2004 to make 'All Books To All' we focus on selling 'less of more' rather than 'more of less', differentiating ourself from other retailers who increasingly focus on bestsellers. All books available to All Currently, The Book Depository is able to ship over 4 million unique titles, within 48 hours, from our fulfillment centre in Gloucester, United Kingdom. This figure is increasing everyday. Apart from publishers, distributors and wholesalers, we even list and supply books from other retailers!