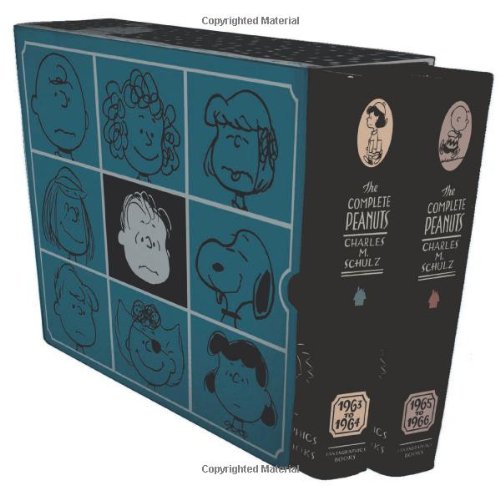 Snoopy becomes the strip's dominant personality and there are two milestones for his character - the first of many 'dogfights' with the Red Baron and the launch of his writing career. This beautiful box set collects the 1963-1964 and 1965-1966 volumes in a new slipcase designed by award-winning graphic novelist Seth. The perfect gift book item!

This boxed set collects the current (1965-66) and previous (1963-64) volumes, in a new slipcase designed by the Award-winning graphic novelist, Seth. It's the perfect gift book item of the season!

Descripción Hardback. Condición: New. Language: English. Brand new Book. In The Complete Peanuts 1963-1964 "My name is 555 95472 but everyone calls me 5 for short. I have two sisters named 3 and 4." With those words, Charles Schulz introduced one (in fact, three) of the quirkiest characters to the Peanuts universe, the numerically-monikered 95472 siblings. They didn't stay around very long but offered some choice bits of satirical nonsense while they did. As it happens, this volume is particularly rich in never-before-reprinted strips: Over 150 (more than one-fifth of the book!) have never seen the light of day since their original appearance over 40 years ago, so this will be a trove of undiscovered treasures even for avid Peanuts collectors. These "lost" strips include Linus making a near-successful run for class president that is ultimately derailed by his religious beliefs (two words: "great" and "pumpkin"), and Snoopy getting involved with a group of politically fanatical birds. Also in this volume: Lucy's attempts at improving her friends branches out from her increasingly well-visited nickel psychiatry booth to an educational slideshow of Charlie Brown's faults (it's so long there's an intermission!). Also, Snoopy's doghouse begins its conceptual expansion, as Schulz reveals that the dog owns a Van Gogh, and that the ceiling is so huge that Linus can paint a vast (and as it turns out unappreciated) "history of civilization" mural on it. Introduction by Bill Melendez, animator of all the Peanuts TV specials starting all the way back with A Charlie Brown Christmas! In The Complete Peanuts 1965-1966 We are now in the mid-1960s, one of Schulz's peak periods of creativity (and one third of the way through the strip's life!). Snoopy has become the strip's dominant personality, and this volume marks two milestones for the character: the first of many "dogfights" with the nefarious Red Baron, and the launch of his writing career ("It was a dark and stormy night."). Two new characters the first two from outside the strip's regular little neighborhood make their bows. Roy (who befriends Charlie Brown and then Linus at summer camp) won't have a lasting impact, but upon his return from camp he regales a friend of his with tales of the strange kids he met, and she has to go check them out for herself. Her name? Peppermint Patty. Introduction by film director and writer Hal Hartley (Flirt, Amateur).". Nş de ref. del artículo: AAS9781560978688