Artículos relacionados a Computer Graphics Through OpenGL: From Theory to Experiments... 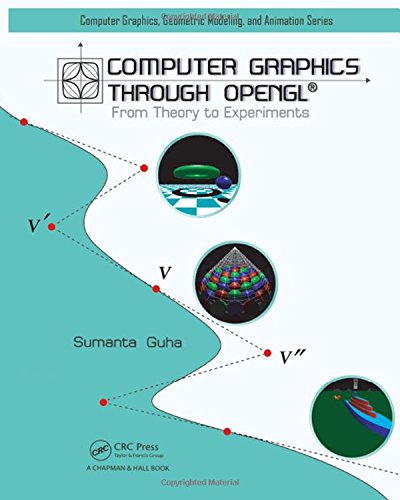 From geometric primitives to animation to 3D modeling to lighting and shading, Computer Graphics Through OpenGL: From Theory to Experiments is a comprehensive introduction to computer graphics that uses an active learning style to teach key concepts. Equally emphasizing theory and practice, the book provides an understanding not only of the principles of 3D computer graphics, but also the use of the OpenGL Application Programming Interface (API) to program 3D applications.

Forming the undergraduate core of the book, the first fourteen chapters cover the concepts fundamental to 3D computer graphics and illustrate how to code fairly sophisticated 3D scenes and animation, including games and movies. The remaining chapters explore more advanced topics, such as the structure of curves and surfaces, applications of projective spaces and transformations, and programmable graphics pipelines.

This textbook uses a hands-on, interactive approach that mixes theory and coding. Designed to be followed with a computer handy, the text makes the theory accessible by having students run clarifying code.

Web Resource
The book’s website www.sumantaguha.com provides program source code that runs on Windows, Mac OS, and Linux platforms. It also includes a guide to installing OpenGL and executing the programs, special software to help run the experiments, and figures from the book. In addition, the website provides a discussion forum for interaction among users of the book.

Sumanta Guha is a professor in the Computer Science and Information Management Program at the Asian Institute of Technology in Thailand. He earned his Ph.D. in computer science from the University of Michigan, Ann Arbor, and taught at the University of Wisconsin in Milwaukee. Dr. Guha’s research interests encompass computational geometry, computer graphics, computational topology, robotics, and data mining.