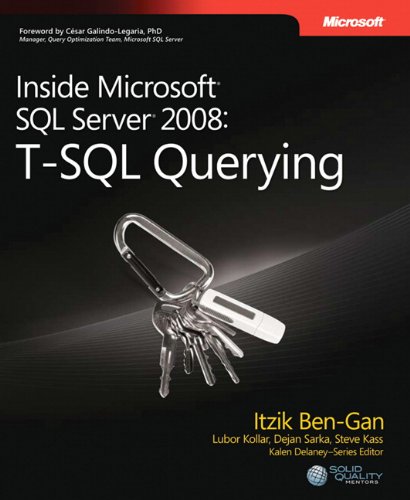 Tackle the toughest set-based querying and query tuning problems—guided by an author team with in-depth, inside knowledge of T-SQL. Deepen your understanding of architecture and internals—and gain practical approaches and advanced techniques to optimize your code’s performance.

Itzik Ben-Gan is a principal mentor and a founder of SolidQ. A Microsoft MVP for SQL Server since 1999, Itzik teaches and consults internationally on T-SQL querying, programming, and query tuning. He has written numerous articles for SQL Server Magazine and MSDN, and speaks at industry events such as Microsoft TechEd, DevWeek, PASS, and SQL Server Connections.

Lubor Kollar is group program manager with the SQL Server Customer Advisory Team at Microsoft, working on the most challenging SQL Server deployments worldwide. He has 13+ years of experience with SQL Server development.

Dejan Sarka is a mentor with SolidQ and focuses on development of database and business intelligence applications. He is a frequent speaker at international conferences such as TechEd, SqlDevCon, and PASS. He is the founder of the Slovenian SQL Server and .NET Users Group. As main author or coauthor, Dejan has written nine books about SQL Server. He has also developed three courses for SolidQ: Data Modeling Essentials, Data Quality and Master Data Management, and Data Mining.