Artículos relacionados a The Beginning of Infinity: Explanations that Transform... 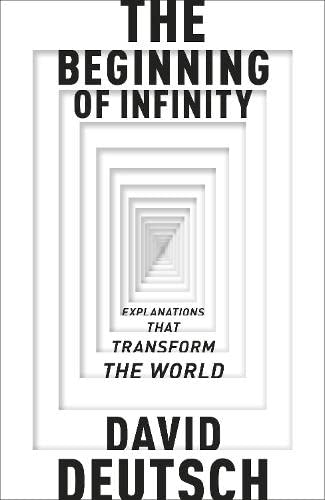 Science has never had an advocate quite like David Deutsch. He is a computational physicist on a par with his touchstones Alan Turing and Richard Feynman, and also a philosopher in the line of his greatest hero, Karl Popper. His arguments are so clear that to read him is to experience the thrill of the highest level of discourse available on this planet and to understand it ...This is the great Life, the Universe and Everything book for our time and the answer is not 42: it is infinity. To understand precisely what Deutsch means by this, you will have to read him. Do so and lose your parochial blinkers forever. (Peter Forbes The Independent)

This is Deutsch at his most ambitious, seeking to understand the implications of our scientific explanations of the world ... I enthusiastically recommend this rich, wide-ranging and elegantly written exposition of the unique insights of one of our most original intellectuals. (Michael Berry Times Higher Education Supplement)

David Deutsch...may well go down in history as one of the great scientists of our age. (Andrew Crumey The Scotsman)

A bold and all-embracing exploration of the nature and progress of knowledge from one of today's great thinkers.

Throughout history, mankind has struggled to understand life's mysteries, from the mundane to the seemingly miraculous. In this important new book, David Deutsch, an award-winning pioneer in the field of quantum computation, argues that explanations have a fundamental place in the universe. They have unlimited scope and power to cause change, and the quest to improve them is the basic regulating principle not only of science but of all successful human endeavor. This stream of ever improving explanations has infinite reach, according to Deutsch: we are subject only to the laws of physics, and they impose no upper boundary to what we can eventually understand, control, and achieve.

In his previous book, The Fabric of Reality, Deutsch describe the four deepest strands of existing knowledge-the theories of evolution, quantum physics, knowledge, and computation-arguing jointly they reveal a unified fabric of reality. In this new book, he applies that worldview to a wide range of issues and unsolved problems, from creativity and free will to the origin and future of the human species. Filled with startling new conclusions about human choice, optimism, scientific explanation, and the evolution of culture, The Beginning of Infinity is a groundbreaking book that will become a classic of its kind.

Descripción Hardcover. Condición: Good. A tan to the page edges/pages Good condition is defined as: a copy that has been read but remains in clean condition. All of the pages are intact and the cover is intact and the spine may show signs of wear. The book may have minor markings which are not specifically mentioned. Most items will be dispatched the same or the next working day. Nş de ref. del artículo: wbb0018540080

Beginning Of Infinity,The: Explanations That Transform The World

Descripción Condición: Good. Your purchase helps support Sri Lankan Children's Charity 'The Rainbow Centre'. Ex-library, so some stamps and wear, but in good overall condition. Our donations to The Rainbow Centre have helped provide an education and a safe haven to hundreds of children who live in appalling conditions. Nş de ref. del artículo: Z1-T-026-02216

Descripción Hardcover. Condición: Very Good. The Beginning of Infinity: Explanations that Transform The World (Allen Lane Science) This book is in very good condition and will be shipped within 24 hours of ordering. The cover may have some limited signs of wear but the pages are clean, intact and the spine remains undamaged. This book has clearly been well maintained and looked after thus far. Money back guarantee if you are not satisfied. See all our books here, order more than 1 book and get discounted shipping. . Nş de ref. del artículo: 7719-9780713992748

Descripción Hardcover. Condición: Very Good. Shipped within 24 hours from our UK warehouse. Clean, undamaged book with no damage to pages and minimal wear to the cover. Spine still tight, in very good condition. Remember if you are not happy, you are covered by our 100% money back guarantee. Nş de ref. del artículo: 6545-9780713992748