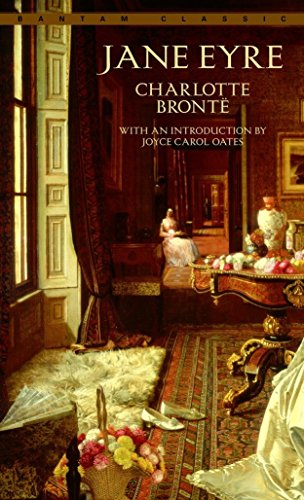 Críticas:
"At the end we are steeped through and through with the genius, the vehemence, the indignation of Charlotte Brontë."--Virginia Woolf
Reseńa del editor:
A plain but spirited Victorian governess's growing love for her mysterious employer, the brooding Mr. Rochester, is threatened by the tragic secret of his mansion. Reissue.

Descripción Mass Market Paperback. Condición: new. Mass Market Paperback. Introduction by Joyce Carol Oates - Nominated as one of America's best-loved novels by PBS's The Great American Read Initially published under the pseudonym Currer Bell in 1847, Charlotte Bronte's Jane Eyreerupted onto the English literary scene, immediately winning the devotion of many of the world's most renowned writers, including William Makepeace Thackeray, who declared it a work "of great genius." Widely regarded as a revolutionary novel, Bronte's masterpiece introduced the world to a radical new type of heroine, one whose defiant virtue and moral courage departed sharply from the more acquiescent and malleable female characters of the day. Passionate, dramatic, and surprisingly modern, Jane Eyre endures as one of the world's most beloved novels. Charlotte Bronte&#039;s impassioned novel is the love story of Jane Eyre, a plain yet spirited governess, and her employer, the arrogant, brooding Mr. Rochester. Published in 1847 under the pseudonym Currer Bell, the book heralded a new kind of heroine&mdash;one whose virtuous integrity, keen intellect, and tireless perseverance broke through class barriers to win equal stature with the man she loved. Hailed by William Makepeace Thackeray as &quot;the masterwork of a great genius,&quot; Jane Eyre is still regarded, over a century later, as one of the finest novels in English literature. Shipping may be from multiple locations in the US or from the UK, depending on stock availability. Nş de ref. del artículo: 9780553211405