Artículos relacionados a A First Course in String Theory 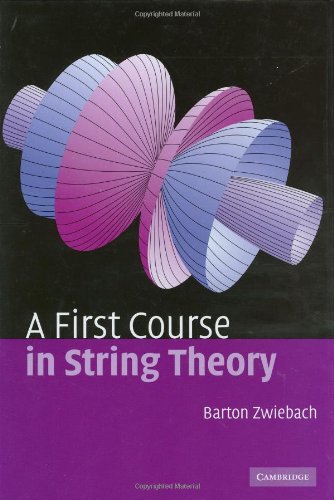 An accessible introduction to the subject of string theory, this book provides a detailed and self-contained demonstration of the main concepts. Ideal as a textbook for advanced undergraduate and beginning graduate courses; also of interest to a wide range of scientists and mathematicians from other fields.

'A refreshingly different approach to string theory that requires remarkably little previous knowledge of quantum theory or relativity. This highlights fundamental features of the theory that make it so radically different from theories based on point-like particles. This book makes the subject amenable to undergraduates but it will also appeal greatly to beginning researchers who may be overwhelmed by the standard textbooks.' Professor Michael Green, University of Cambridge

'Barton Zwiebach has written a careful and thorough introduction to string theory that is suitable for a full-year course at the advanced undergraduate level. There has been much demand for a book about string theory at this level, and this one should go a long way towards meeting that demand.' Professor John Schwarz, California Institute of Technology

'There is a great curiosity about string theory, not only among physics undergraduates but also among professional scientists outside of the field. This audience needs a text that goes much further than the popular accounts but without the full technical detail of a graduate text. Zwiebach's book meets this need in a clear and accessible manner. It is well-grounded in familiar physical concepts, and proceeds through some of the most timely and exciting aspects of the subject.' Professor Joseph Polchinski, University of California, Santa Barbara

'Zwiebach, a respected researcher in the field and a much beloved teacher at MIT, is truly faithful to his goal of making string theory accessible to advanced undergraduates – the test develops intuition before formalism, usually through simplified and illustrative examples ... Zwiebach avoids the temptation of including topics that would weigh the book down and make many students rush it back to the shelf and quit the course.' Physics Today

'... well-written ... takes us through the hottest topics in string theory research, requiring only a solid background in mechanics and some basic quantum mechanics. ... This is not just one more text in the ever-growing canon of popular books on string theory ...'. The Times Higher Education Supplement

'... the book provides an excellent basis for an introductory course on string theory and is well-suited for self-study by graduate students or any physicist who wants to learn the basics of string theory.' Zentralblatt MATH

'... excellent introduction by Zwiebach ... aimed at advanced undergraduates who have some background in quantum mechanics and special relativity, but have not necessarily mastered quantum field theory and general relativity yet ... the book ... is a very thorough introduction to the subject ... Equipped with this background, the reader can safely start to tackle the books by Green, Schwarz and Witten and by Polchinski.' Marcel L Vonk, Mathematical Reviews Clippings

An accessible introduction to string theory, this book provides a detailed and self-contained demonstration of the main concepts involved. The first part deals with basic ideas, reviewing special relativity and electromagnetism while introducing the concept of extra dimensions. D-branes and the classical dynamics of relativistic strings are discussed next, and the quantization of open and closed bosonic strings in the light-cone gauge, along with a brief introduction to superstrings. The second part begins with a detailed study of D-branes followed by string thermodynamics. It discusses possible physical applications, and covers T-duality of open and closed strings, electromagnetic fields on D-branes, Born–Infeld electrodynamics, covariant string quantization and string interactions. Primarily aimed as a textbook for advanced undergraduate and beginning graduate courses, it will also be ideal for a wide range of scientists and mathematicians who are curious about string theory.