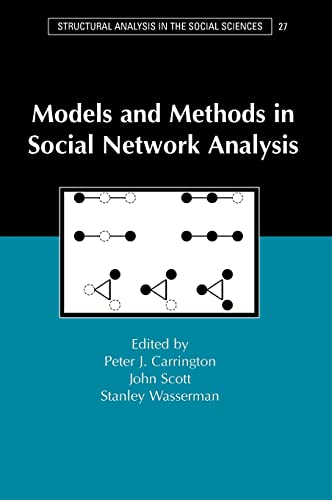 This book consists of review articles by leading methodologists, all commissioned exclusively for this volume. The book will complement the classic text by Wasserman and Faust, Social Network Analysis: Methods and Applications (also available from Cambridge University Press).

Peter J. Carrington is Professor of Sociology at the University of Waterloo. His main teaching and research interests are in the criminal and juvenile justice systems, social networks, and research methods and statistics. He has published articles in the Canadian Journal of Criminology and Criminal Justice, the American Journal of Psychiatry, the Journal of Mathematical Sociology, and Social Networks. He has most recently been involved in several evaluation studies for the Department of Justice Canada. He is currently doing research on police discretion, criminal and delinquent careers and networks, and the impact of the Youth Criminal Justice Act on the youth justice system in Canada.

John Scott is Professor of Sociology at the University of Essex. An active member of the British Sociological Association, he served as its President from 2001 until 2003. He has written more than fifteen books, including Corporate Business and Capitalist Classes (1997), Social Network Analysis (1991 and 2000), Sociological Theory (1995), and Power (2001). With James Fulcher he is the author of the leading introductory textbook Sociology (1999 and 2003). He is a member of the Editorial Board of the British Journal of Sociology and is an Academician of the Academy of Learned Societies in the Social Sciences.

Stanley Wasserman is Professor of Psychology, Statistics, and Sociology at the University of Illinois-Champaign. He has done research on methodology for social networks for almost thirty years. He has edited books on the subject, including Advances in Social Network Analysis: Research in the Social and Behavioral Sciences (1994), and Social Network Analysis: Methods and Applications (1994). His work is recognized by statisticians as well as social and behavioral scientists worldwide. He is currently Book Review Editor of Chance, and an Associate Editor of the Journal of the American Statistical Association and Psychometrika. He has also been a very active consultant, and is currently Chief Scientist of Visible Path, an organizational network software firm.

Descripción CAMBRIDGE UNIVERSITY PRESS, United Kingdom, 2010. Hardback. Condición: New. Language: English. Brand new Book. Models and Methods in Social Network Analysis, first published in 2005, presents the most important developments in quantitative models and methods for analyzing social network data that have appeared during the 1990s. Intended as a complement to Wasserman and Faust's Social Network Analysis: Methods and Applications, it is a collection of articles by leading methodologists reviewing advances in their particular areas of network methods. Reviewed are advances in network measurement, network sampling, the analysis of centrality, positional analysis or blockmodelling, the analysis of diffusion through networks, the analysis of affiliation or 'two-mode' networks, the theory of random graphs, dependence graphs, exponential families of random graphs, the analysis of longitudinal network data, graphical techniques for exploring network data, and software for the analysis of social networks. Nş de ref. del artículo: LHB9780521809597

9. Models and Methods in Social Network Analysis (Structural Analysis in the Social Sciences)