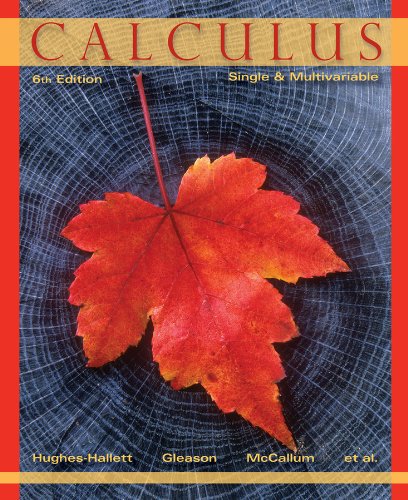 Calculus: Single and Multivariable, 6th Edition continues the effort to promote courses in which understanding and computation reinforce each other. The 6th Edition reflects the many voices of users at research universities, four-year colleges, community colleges, and secondary schools. This new edition has been streamlined to create a flexible approach to both theory and modeling. The text includes a variety of problems and examples from the physical, health, and biological sciences, engineering and economics; emphasizing the connection between calculus and other fields. In addition, new problems on the mathematics of sustainability and new case studies on calculus in medicine by David E. Sloane, MD have been added.

Hughes Hallett earned a bachelor's degree in mathematics from the University of Cambridge in 1966, and a master's degree from Harvard in 1976. She worked as a preceptor and senior preceptor at Harvard from 1975 to 1991, as an instructor at the Middle East Technical University in Ankara, Turkey from 1981 to 1984, and as a faculty member at Harvard from 1986 to 1998. She served as Professor of the Practice in the Teaching of Mathematics at Harvard from 1991 to 1998. She moved to Arizona in 1998, and took on her adjunct position at the Kennedy School in 2001.