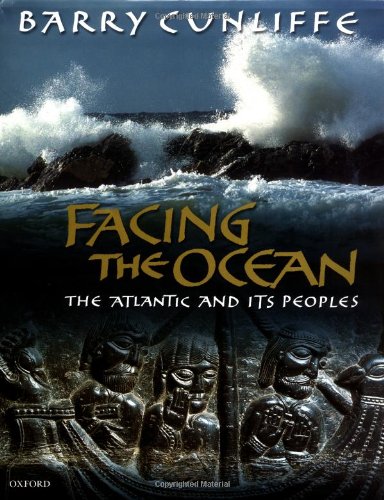 If you read no other book on the subject this is the one to go for. Fortean Times Cunliffe is, quite simply, on top of his subject, and I can recommend this for anyone interested in our origins. Fortean Times ... excellently presented, with numerous colour illustrations, maps, diagrams and figures as well as a well-measured text. Fortean Times ... as close to the definitive overview of this subject as we're going to get. Fortean Times A study of immense scope and considerable erudition ... characteristically engaging style of writing ... clear exposition is helped by a sequence of splendid illustrations ... there is enormous richness here, perhaps to be tasted from time to time with pleasure and profit by both the general reader and the scholar, rather than consumed in one sitting. English Historical Review Facing the Ocean is a remarkable achievement. Cunliffe has produced a measured and masterfully executed account of the long-term development of Atlantic communities and their maritime connections, bringing together for the first time a staggering amount of material ... As a synthesis of an under-studied zone in archaeology, this book has been much needed and should be wholeheartedly welcomed. Jon Henderson, Times Higher Education Supplement This is the book I have wanted to write for a lifetime. Barry Cunliffe A scholarly tome of enormous scope ... an enjoyable read. Observer Magisterial book. History Today It is a brilliant, articulate exposition of one of the most fascinating new ideas in archaeology. Richard Ellis, The Times, Intellectually bold and exciting book, written with great verve and enviable self-confidence. Jeremy Black, Literary Review

In this highly illustrated book Barry Cunliffe focuses on the western rim of Europe--the Atlantic facade--an area stretching from the Straits of Gibraltar to the Isles of Shetland.We are shown how original and inventive the communities were, and how they maintained their own distinctive identities often over long spans of time. Covering the period from the Mesolithic hunter-gatherers, c. 8,000 BC, to the voyages of discovery c . AD 1500, he uses this last half millennium more as a well-studied test case to help the reader better understand what went before. The beautiful illustrations show how this picturesque part of Europe has many striking physical similarities. Old hard rocks confront the ocean creating promontories and capes familiar to sailors throughout the millennia. Land's End, Finistere, Finisterra--until the end of the fifteenth century this was where the world ended in a turmoil of ocean beyond which there was nothing. To the people who lived in these remote places the sea was their means of communication and those occupying similar locations were their neighbours. The communities frequently developed distinctive characteristics intensifying aspects of their culture the more clearly to distinguish themselves from their in-land neighbours. But there is an added level of interest here in that the sea provided a vital link with neighbouring remote-place communities encouraging a commonality of interest and allegiances. Even today the Bretons see themselves as distinct from the French but refer to the Irish, Welsh, and Galicians as their brothers and cousins. Archaeological evidence from the prehistoric period amply demonstrates the bonds which developed and intensified between these isolated communities and helped to maintain a shared but distinctive Atlantic identity.