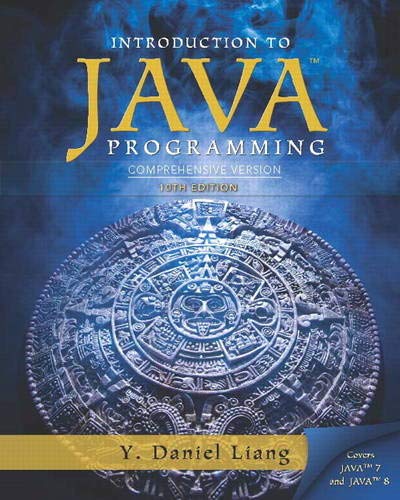 NOTE: You are purchasing a standalone product; MyProgrammingLab does not come packaged with this content. If you would like to purchase both the physical text and MyProgrammingLab search for ISBN-10: 0133813460/ISBN-13: 9780133813463. That package includes ISBN-10: 0133761312/ISBN-13: 9780133761313 and ISBN-10: 0133762513 /ISBN-13: 9780133762518. MyProgrammingLab should only be purchased when required by an instructor. This text is intended for a 1-, 2-, or 3-semester CS1 course sequence. Comprehensive coverage of Java and programming make this a useful reference for beginning programmers and IT professionals. Daniel Liang teaches concepts of problem-solving and object-oriented programming using a fundamentals-first approach. Beginning programmers learn critical problem-solving techniques then move on to grasp the key concepts of object-oriented, GUI programming, advanced GUI and Web programming using Java. Liang approaches Java GUI programming using JavaFX, not only because JavaFX is much simpler for new Java programmers to learn and use but because it has replaced Swing as the new GUI tool for developing cross-platform-rich Internet applications on desktop computers, on hand-held devices, and on the Web. Additionally, for instructors, JavaFXprovides a better teaching tool for demonstrating object-oriented programming. Teaching and Learning Experience To provide a better teaching and learning experience, for both instructors and students, this program offers: Fundamentals-First Approach: Basic programming concepts are introduced on control statements, loops, functions, and arrays before object-oriented programming is discussed. Problem-Driven Motivation: The examples and exercises throughout the book emphasize problem solving and foster the concept of developing reusable components and using them to create practical projects. A Superior Pedagogical Design that Fosters Student Interest: Key concepts are reinforced with objectives lists, introduction and chapter overviews, easy-to-follow examples, chapter summaries, review questions, programming exercises, and interactive self-tests. The Most Extensive Instructor and Student Support Package Available: The author maintains a website at www.pearsonhighered.com/liang that includes multiple interactive resources.

Dr. Liang earned his Ph.D. in Computer Science from the University of Okalahoma in 1991, and an MS and BS in Computer Science from Fudan University in Shanghai, China, in 1986 and 1983. Prior to joining Armstrong, he was an associate professor in computer science at Purdue University in Fort Wayne, where he twice received the Excellence in Research award. Dr. Liang was trained in theoretical computer science. He was active in graph algorithms from 1990 to 1995 and published more than ten papers in several established journals such as SIAM Journal on Computing, Discrete Applied Mathematics, Acta Informatics, and Information Processing Letters. Since 1996, he has devoted to writing texts and published more than thirty books with Prentice Hall. His popular computer science texts are widely adopted in the world. Dr. Liang was elected a Java Champion in 2005 by Sun Microsystems. He has given lectures on Java internationally.