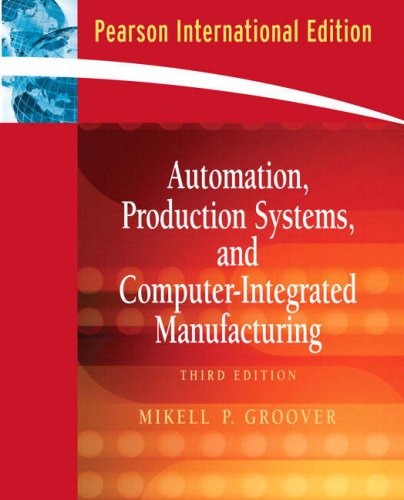 For advanced undergraduate/ graduate-level courses in Automation, Production Systems, and Computer-Integrated Manufacturing. This exploration of the technical and engineering aspects of automated production systems provides the most advanced, comprehensive, and balanced coverage of the subject of any text on the market. It covers all the major cutting-edge technologies of production automation and material handling, and how these technologies are used to construct modern manufacturing systems.

MIKELL P. GROOVER is Professor of Industrial and Manufacturing Systems Engineering at Lehigh University, where he also serves as Director of the Manufacturing Technology Laboratory. He holds the following degrees all from Lehigh: B.A. (1961) in Arts and Science, B.S. (1962) in Mechanical Engineering, M.S. (1966) and Ph.D. (1969) in Industrial Engineering. He is a Registered Professional Engineer in Pennsylvania (since 1972). His industrial experience includes full-time employment at Eastman Kodak Company as a Manufacturing Engineer. Since joining Lehigh, he has done consulting, research, and project work for a number of industrial companies including Ingersoll-Rand, Air Products & Chemicals, Bethlehem Steel, and Hershey Foods. His teaching and research areas include manufacturing processes, metal cutting theory, automation and robotics, production systems, material handling, facilities planning, and work systems. He has received a number of teaching awards, including the Albert Holzman Outstanding Educator Award from the Institute of Industrial Engineers (IIE). His publications include over 75 technical articles and papers which have appeared in Industrial Engineering, IIE Transactions, NAMRC Proceedings, ASME Transactions, IEEE Spectrum, International Journal of Production Systems, Encyclopaedia Britannica, SME Technical Papers, and others. Professor Groover's avocation is writing textbooks on topics in manufacturing and automation. His previous books are used throughout the world and have been translated into French, German, Korean, Spanish, Portuguese, Russian, Japanese, and Chinese. His book Fundamentals of Modern Manufacturing received the 1996 IIE Joint Publishers Award and the 1996 M. Eugene Merchant Manufacturing Textbook Award from the Society of Manufacturing Engineers. Dr. Groover is a member of the Institute of Industrial Engineers, American Society of Mechanical Engineers (ASME), Society of Manufacturing Engineers (SME), and North American Manufacturing Research Institute (NAMRI). He is a Fellow of IIE and SME.

Comprar usado
Condici¾n: Regular
This is an ex-library book and... Ver este artĒculo

Descripci¾n Pearson, 2008. Condici¾n: Fair. This is an ex-library book and may have the usual library/used-book markings inside.This book has hardback covers. In fair condition, suitable as a study copy. No dust jacket. Please note the Image in this listing is a stock photo and may not match the covers of the actual item,1250grams, ISBN:9780132070737. N║ de ref. del artĒculo: 6972884

Descripci¾n Pearson, 2007. Paperback. Condici¾n: Good. Good condition is defined as: a copy that has been read but remains in clean condition. All of the pages are intact and the cover is intact and the spine may show signs of wear. The book may have minor markings which are not specifically mentioned. Most items will be dispatched the same or the next working day. N║ de ref. del artĒculo: wbb0012584355