Artículos relacionados a Physics, Vol. I: 1 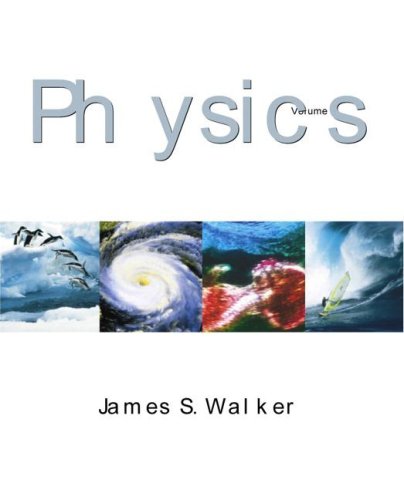 For courses in Algebra-based Physics. Jim Walker's teaching experience inspired him to create this textbook. Physics is designed to give students conceptual insight and create active involvement in the learning process. While most textbooks have "one size fits all" examples, Walker provides a suite of pedagogical tools that give students an active role in the learning and problem-solving process.

James S. Walker obtained his Ph.D. in theoretical physics from the University of Washington in 1978. He subsequently served as a post-doc at the University of Pennsylvania, the Massachusetts Institute of Technology, and the University of California at San Diego before joining the physics faculty at Washington State University in 1983. Professor Walker's research interests include statistical mechanics, critical phenomena, and chaos. His many publications on the application of renormalization-group theory to systems ranging from absorbed monolayers to binary-fluid mixtures have appeared in Physical Review, Physical Review Letters, Physica, and a host of other publications. He has also participated in observations on the summit of Mauna Kea, looking for evidence of extrasolar planets. Jim Walker likes to work with students at all levels, from judging elementary school science fairs to writing research papers with graduate students, and has taught introductory physics for many years. His enjoyment of this course and his empathy for students have earned him a reputation as an innovative, enthusiastic, and effective teacher. Jim's educational publications include "Reappearing Phases" (Scientific American, May 1987) as well as articles in the American Journal of Physics and The Physics Teacher. When he is not writing, conducting research, teaching, or developing new classroom demonstrations and pedagogical materials, Jim enjoys amateur astronomy, bird watching, photography, juggling, unicycling, boogie boarding, and kayaking. He recently spent three weeks rafting through the Grand Canyon and hiking in various side canyons. Jim is also an avid jazz pianist and organist. He has served as ballpark organist for several Class A minor league baseball teams, including minor league affiliates of the Seattle Mariners and San Francisco Giants.