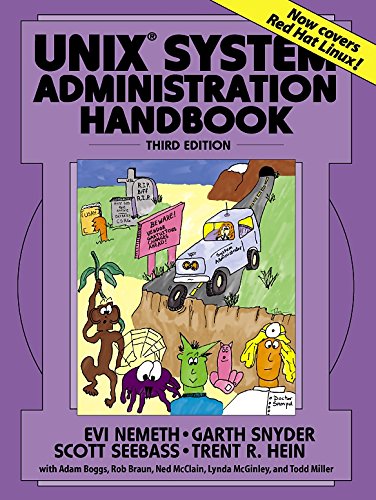 Now covers Red Hat Linux! Written by Evi Nemeth, Garth Snyder, Scott Seebass, and Trent R. Hein with Adam Boggs, Rob Braun, Ned McClain, Dan Crawl, Lynda McGinley, and Todd Miller "This is not a nice, neat book for a nice, clean world. It's a nasty book for a nasty world. This is a book for the rest of us." -Eric Allman and Marshall Kirk McKusick "I am pleased to welcome Linux to the UNIX System Administration Handbook!" -Linus Torvalds, Transmeta "This book is most welcome!" -Dennis Ritchie, AT&T Bell Laboratories This new edition of the world's most comprehensive guide to UNIX system administration is an ideal tutorial for those new to administration and an invaluable reference for experienced professionals. The third edition has been expanded to include "direct from the frontlines" coverage of Red Hat Linux. UNIX System Administration Handbook describes every aspect of system administration-from basic topics to UNIX esoterica-and provides explicit coverage of four popular UNIX systems: This book stresses a practical approach to system administration. It's packed with war stories and pragmatic advice, not just theory and watered-down restatements of the manuals. Difficult subjects such as sendmail, kernel building, and DNS configuration are tackled head-on. Examples are provided for all four versions of UNIX and are drawn from real-life systems-warts and all. "This book is where I turn first when I have system administration questions. It is truly a wonderful resource and always within reach of my terminal." -W. Richard Stevens, author of numerous books on UNIX and TCP/IP "This is a comprehensive guide to the care and feeding of UNIX systems. The authors present the facts along with seasoned advice and numerous real-world examples. Their perspective on the variations among systems is valuable for anyone who runs a heterogeneous computing facility." -Pat Parseghian, Transmeta "We noticed your book on the staff recommendations shelf at our local bookstore: 'Very clear, a masterful interpretation of the subject.' We were most impressed, until we noticed that the same staff member had also recommended Aunt Bea's Mayberry Cookbook." -Shannon Bloomstran, history teacher

Descripción PAPERBACK. Condición: New. Book Cover and ISBN may be different from US edition but contents as same US Edition. Excellent Quality,Quick delivery, We may ship the books from Asian regions for inventory purpose. Our courier service is not available at PO BOX. Nş de ref. del artículo: nt_9780130206015

Descripción PAPERBACK. Condición: New. Book Cover and ISBN may be different from US edition but contents as same US Edition. Excellent Quality,Quick delivery by USPS/UPS/FEDEX/DHL/ARAMEX, We may ship the books from Asian regions for inventory purpose. Our courier service is not available at PO BOX. Nş de ref. del artículo: abe_jan_9780130206015