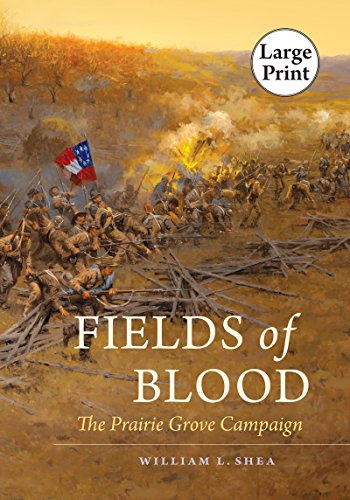 Críticas: A first rate history of this remote part of the Civil War.--Blue & Gray Magazine A fine addition to the growing body of literature on the long-neglected Trans-Mississippi Theater of the Civil War. . . . A model campaign study, and it will become the standard work on the subject.--North Carolina Historical Review Thoroughly researched and engagingly written. . . . Shea's ability to illuminate the interconnections among strategy, logistics, and geography is especially noteworthy. . . . An excellent study of an important but often overlooked campaign.--Annals of Iowa Fields of Blood is impressive.--Journal of the Civil War Era Thoroughly researched and engagingly written....Shea's ability to illuminate the interconnections among strategy, logistics, and geography is especially noteworthy....[This] is an excellent study of an important but often overlooked campaign and is a welcome addition to the literature on the Trans-Mississippi Theater.--The Annals of Iowa Anyone interested in Civil War military operations should read this book.--The Journal of America's Military Past With an exhaustive array of archival materials, insightful analysis, and good writing. . . . Fields of Blood provides readers with a concise, illuminating look at a forgotten fight. . . . A model campaign study which draws on as many of the scarce resources available to make sense of what today is still a very confusing battle. . . . Students of the Trans-Missippi and those who enjoy solidly constructed and easy to read campaign studies will want to own this book. Those who enjoyed Shea's earlier work on Pea Ridge will doubtless appreciate this effort equally.--TOCWOC: A Civil War Blog Characterized by deep research, clear organization, shrewd analysis, and engaging writing, William L. Shea's Fields of Blood should be regarded as the new standard history of the Prairie Grove Campaign. A weighty contribution to the literature of the Trans-Mississippi theater, it is deserving of a place on the bookshelf of every Civil War student. Very highly recommended.--Andrew Wagenhoffer, Civil War Books and Authors Shea brings to his work a great deal of familiarity with the campaign . . . enjoyable and insightful. . . . Will stand as the standard account of the Prairie Grove campaign, which, thanks to Shea, no longer resides in underserved obscurity.--Arkansas Historical Quarterly This is a sound and thorough study. It should stand as the benchmark work on Prairie Grove for at least the next generation.--H-Net Reviews Combined with excellent maps, Shea's description of the operational maneuvers and his detailing of the tactical actions are masterful. . . . A superb account of a signature campaign of the theater.--Journal of Military History A great read and . . . very informative about a lesser-known battle that had major consequences.--The Oklahoman Making ample use of firsthand accounts to describe the battle's various stages, Shea leaves his audience feeling cold, hungry, exhausted, scared, and lucky to be alive, all without sacrificing the narrative's flow--an impressive feat for a scholarly study. . . . Fields of Blood stands as a model for future studies.--The Journal of Southern History If further proof were needed of William L. Shea's mastery of the Civil War campaign history, this is it. . . . He has attained even loftier heights with a thoughtful and meticulous account of Prairie Grove.--Civil War Book Review Shea cogently unravels the campaign he calls one of the war's 'best--kept secrets.'--Military History of the West

Descripción University of North Carolina Press, 2010. Condición: Good. A+ Customer service! Satisfaction Guaranteed! Book is in Used-Good condition. Pages and cover are clean and intact. Used items may not include supplementary materials such as CDs or access codes. May show signs of minor shelf wear and contain limited notes and highlighting. Nº de ref. del artículo: 0807866024-2-4

Descripción The University of North Carolina Press. PAPERBACK. Condición: Good. 0807866024 Bumped and creased book with tears to the extremities, but not affecting the text block and a remainder mark to one edge - Good. Nº de ref. del artículo: Z0807866024Z3