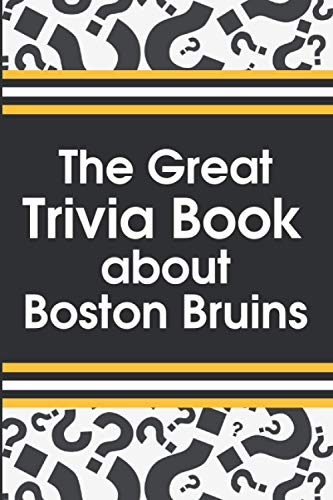 Descripción Independently Published, United States, 2020. Paperback. Condición: New. Language: English. Brand new Book. ? Do you consider yourself a Boston Bruins fan?But, do you know which of those players scored the most goals for the team? How about which was drafted the highest? If you think you've got what it takes to show off your expertise in all sorts of Boston Bruins knowledge, you can put that confidence to the test with The Best Boston Bruins Trivia Book ever!?This book will set the record straight on such team history as- Which Bruin invented goalie nets, beveled pucks, and skate guards.- Who was the only man to play for the Bruins, Celtics, AND Red Sox.- Which Bruin threatened to knock out half of Rocket Richard's teeth.- How players became known as Mr. Zero, Ol' Blood & Guts, and the Merlot Line.- Which Hall of Fame goalie was drafted by the Bruins.without realizing it for a decade.?With hundreds of fun facts and trivia items found inside, The Best Boston Bruins Trivia Book ever is a great read for anyone who is a fan of the team. Covered inside is fun facts and little known information about the franchise, significant moments in team history, and more.? Find out the answers to these and many more questions in The Best Boston Bruins Trivia Book ever. Nş de ref. del artículo: APC9798559072517