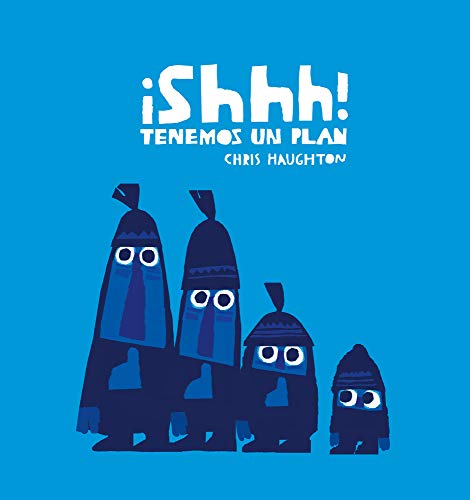 Chris Haughton tells a simple story with illustrations that are reminiscent of Eric Carle.... With few words on each page and a repetitive pattern, young readers will delight in this engaging story. - Library Media Connection

'One of the most exciting author/illustrators in children's books today and this latest offering is a delight ... a lovely book for reading aloud full of expression and fun, with a final twist in the furry tail' Daily Mail

'An entertaining tale of hapless hunters being bamboozled by birds with plenty of repetition and humour to keep both a 20 month old and nearly five year old amused. And, of course, this against the backdrop of Haughton's distinctive illustrations, which are divine' Babino Goodies

Big, blocky shapes and intense hues make the action simple to follow, and Haughton's text is similarly telegraphic. ... The delicious stupidity of the hunting trio, the purity of heart of their small companion, and the sweet-tempered drama of each page turn make this a classic exercise in picture-book making. - Publishers Weekly

(STARRED REVIEW) With cover art recalling Ungerer's The Three Robbers and the wry sensibility of Klassen's Hat books, this is a natural choice for any storytime. A spare, humorous text pairs with blocky, digital illustrations to tell the story... Plan on repeated readings. - Horn Book

(STARRED REVIEW) In a gorgeous nocturnal landscape of deep purples and blues, four figures go marching along. ... They tiptoe towards the bird with hilariously expressive body language... In a breathtakingly rich spread, a flock of colorful, jewel-toned birds appear and drive the schemers into retreat. ... A masterful delight, this crafty caper has huge kid appeal and a title/refrain that will easily sneak into the family lexicon: shh! We have a plan. This perfect blend of circular narrative, deceptively spare art, and humor becomes a story that kids will want to read at storytime, at home, and to themselves if no adult is handy. - School Library Journal

'One of the most exciting new voices in children's literature, comes a new picture book about a beautiful bird, an unquenchable desire and plans gone awry' The Publisher's Association's Best New Children's Books Summer 2014, The Guardian

(Starred Review) There's a bouncy staccato music in the carefully structured text, and listeners will quickly anticipate the patterns and helpfully join in on the repetitions as they root for the little guy who knows better than the big fools. Haugen's art is original yet easily legible... The temptation to act this out will be almost irresistible, so channel the impulse into an organized (or even semi-organized) performance. - Bulletin of the Center for Children's Books

'The truth of one of Bornholdt's observations - "Reading a book of pictures is still reading" - will become immediately obvious to the "reader" of Chris Haughton's picture book Shh! We Have a Plan True, there is a minimalist text of just over 100 words, but it is in the dynamism of the magnificent artwork that Haughton's creativity is most clearly visible. His combination of collage and silhouette, aided by a judiciously selective use of colour, results in a sequence of images that, in more than one sense, tell their own story. They also manage to reflect the mischief and comedy inherent in a narrative where a group of hapless humans insists on becoming bird-catchers, even if one of them has reservations about their intentions. But some people, as the concluding pages remind us, never learn' Irish Times