Artículos relacionados a Before They Pass Away (Photographer)

Jimmy Nelson Before They Pass Away (Photographer)

Before They Pass Away (Photographer) 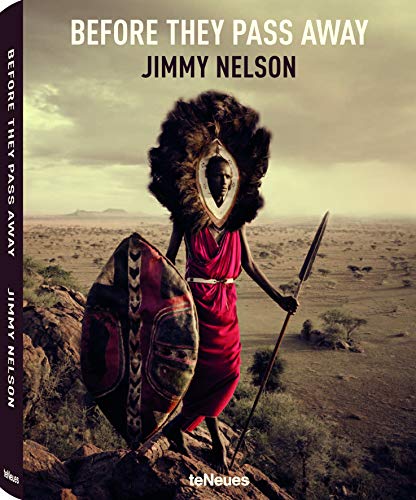 For sheer splendor, the catwalks of New York, Milan and Paris combined can barely touch the eagle hunters of Mongolia. Riding squat ponies through the mountains, these Turkic peoples wear high-domed and winged fur hats, embroidered felt boots and leggings, cloaks of reindeer hide, studded metal belts, fearsome hooded eagles perched on their arms. The fierce elegance of their clothing fully matches that of the stark landscape they inhabit; it also, and not incidentally, testifies to the irrepressible human will to beautify. That conclusion inevitably results from viewing "Before They Pass Away," the British photographer Jimmy Nelson's tombstone-size new volume (teNeues, $150) documenting vanishing tribal cultures around the world. The book results from a project taking years and is less ethnology or anthropology than a document of his romance with otherness. In his strenuous travels with an archaic studio camera, Mr. Nelson visited 35 of the world's least known and most imperiled tribal peoples -- from the Huli and Kalam tribes of New Guinea, to the Tsaatan of Mongolia and the Mursi people inhabiting the highlands of the Omo River valley in remote southern Ethiopia. Guy Trebay, New York Times.com Fashion and Style Section, October 18, 2013 Jimmy Nelson has spent the past three years traveling to some of the most remote places on Earth capturing the lives of indigenous people, from the frigid moutains of Mongolia to the endless sandy deserts of Namibia.Drama and emotion are crucial to Nelson's photography because he's on a search for beauty. Lorraine Boissoneault, weather.com, October 1, 2013 The ingenuity of tribal societies shines in "Before They Pass Away."..Nelson brings the expressive personalities further to life with a photographic style derived from Irving Penn and Malik Sidibe, making for a visually rich and fascinating read-and an ideal conversation-starter on any well-curated coffee table.Fabio Morelli, Elle Decor.com, October 8, 2013

This historic volume showcases tribal cultures around the world. With globalization, these societies are to be prized for their distinctive lifestyles, art and traditions. They live in close harmony with nature, now a rarity in our modern era. Jimmy Nelson not only presents us with stunning images of customs and artifacts, but also offers insightful portraits of people who are the guardians of a culture that they--and we--hope will be passed on to future generations in all its glory. Nelson's large-plate field camera captures every intricate detail and fine nuance for posterity. What's more, this splendid pageantry is set against a vivid backdrop of some of the world's most pristine landscapes. English/German/French edition.

1. Before They Pass Away (Photography) (English, French and German Edition)

3. Before They Pass Away

4. Before They Pass Away

Descripción teNeues Verlag GmbH + Co KG. Condición: New. Showcases tribal cultures around the world. This title presents us with images of customs and artifacts, and also offers insightful portraits of people who are the guardians of a culture that they - and we - hope will be passed on to future generations in all its glory. Num Pages: 400 pages, 500 Colour. BIC Classification: AJCR. Category: (G) General (US: Trade). Dimension: 309 x 385 x 55. Weight in Grams: 5452. 2013. Multilingual. Hardcover. . . . . Books ship from the US and Ireland. Nş de ref. del artículo: 9783832797591

6. Before They Pass Away (Photography) (English, French and German Edition)

7. Before They Pass Away

8. Before They Pass Away

10. Before They Pass Away (Photography) (English, French and German Edition)