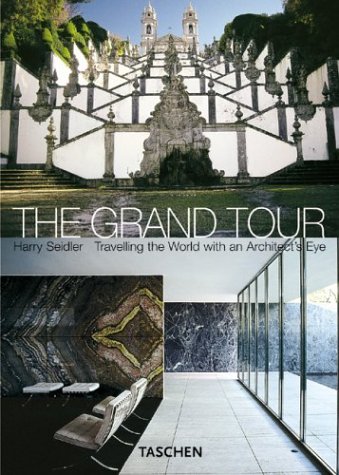 Architect Harry Seidler has spent more than 50 years traveling the globe, extensively photographing the peak achievements in architecture from 3000 B.C. to the present day. Thanks to sound advice given to him early on by his photographer brother, Marcell ("Only use Leica cameras and Kodachrome film, which is archival"), Seidler's hobby quickly developed into a passion and, finally, an impressive archive of world architecture. Including, of course, many of the world's most famous architectural structures, Seidler's photographs illustrate the history and style - country by country - of architecture in Europe, the Middle East, Asia, and the Americas. Divided into chapters by country, each with a brief introduction outlining its architectural history, [i]Grand Tour[/i] offers armchair travelers, students, architecture buffs, and historians the opportunity to browse the buildings of the world through one man's photographs - the fruits of a passionate, half-century endeavor.

Born in Vienna, Austria, [b]Harry Seidler[/b] studied architecture at the University of Manitoba in Winnipeg before winning a scholarship to Harvard, where he studied under Walter Gropius. He also studied under Josef Albers at Black Mountain College in North Carolina and was the chief assistant of Marcel Breuer in New York from 1946 to 1948. He worked with Oscar Niemeyer in Rio de Janeiro before opening his own practice in Sydney in 1949. He has taught at the Harvard School of Design, the ETH in Zurich, and the University of Sydney. In 1996, Seidler was awarded the RIBA gold medal.

1. The Grand Tour: Travelling the World with an Architect's Eye

2. The Grand Tour: Travelling the World with an Architect's Eye Harry Seidler

3. The Grand Tour: Travelling the World with an Architect's Eye

4. The Grand Tour: Travelling the World with an Architect's Eye