Artículos relacionados a Tigers: Leaders of the New Asia--Pacific

Tigers: Leaders of the New Asia--Pacific 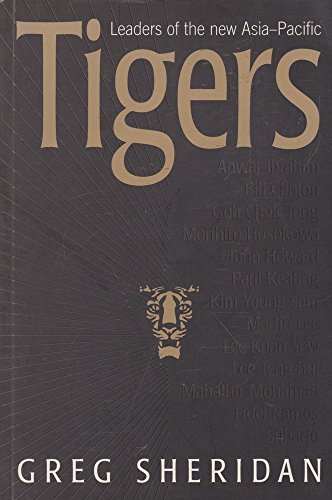 This is a study of the most powerful political leaders in the new Asia. From Indonesia's President Suharto to America's Bill Clinton, from Singapore's Lee Kuan Yew to the Philippine's Fidel Ramos, from Korea's Kim Young Sam to Malaysia's Dr Mahathir, this work offers an interpretation of each leader's career, his policies and successes and failures. This is also the story of the region itself, the dramatic changes in the way its people live and the new patterns of power and authority which have emerged. It is tole through the achievements of the men who have ridden, shaped and benefited from these changes. It assesses the legacy these leaders have bequeathed their nations and the world.

Greg Sheridan is the Foreign Editor of The Australian and the editor of Living With Dragons (1994). Tigers is based on scores of exclusive interviews and a decade's work, travelling in and reporting on the region.

1. Tigers: Leaders of the New Asia-Pacific