Artículos relacionados a A Lover of Unreason: The Life and Tragic Death of Assia... 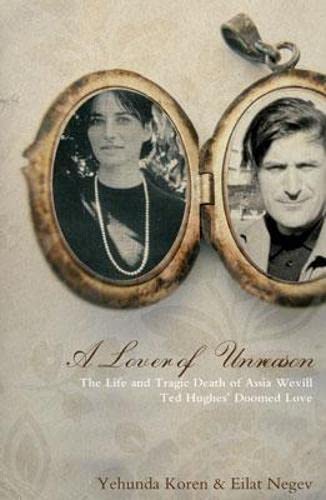 Dust jacket worn, some marking to page edges, owner's inscription. Shipped from the U.K. All orders received before 3pm sent that weekday.

"Unforgettable in its intensity. Easily the best work ever on Hughes and his world. One of the most wonderfully well-written and powerful literary biographies I have encountered." Roger Lewis, Mail on Sunday

'Assia was my true wife, and the best friend I ever had', wrote Ted Hughes, after his lover surrendered her life and that of their young daughter in 1969, six years after Sylvia Plath had suffered a similiar fate. Diva, she-devil, enchantress, muse, Lillith, Jezebel - Assia inspired many epithets during her life. The tragic story of Sylvia Plath and Ted Hughes has always been related from one of two points of view: hers or his. Missing for over four decades had been a third: that of Hughes's mistress. This first biography of Assia Wevill views afresh the Plath-Hughes relationship and at the same time, recounts the journey that shaped her life. Wevill's is a complex story, formed as it is by the pull of often contrary forces.

1. A Lover of Unreason

2. A LOVER OF UNREASON: THE BIOGRAP

3. A LOVER OF UNREASON: THE BIOGRAP

4. A LOVER OF UNREASON: THE BIOGRAP

5. A Lover of Unreason: The Biography of Assia Wevill