Artículos relacionados a A Titanic myth: The Californian incident

A Titanic myth: The Californian incident 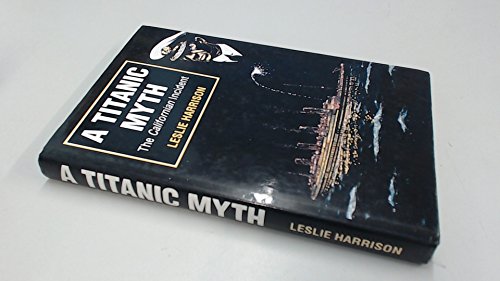 1. A Titanic myth: The Californian incident

Descripción The S. P. A. in conjunction with Leslie Harrison, 1992. Hardcover. Condición: Used; Good. **Simply Brit** Shipped with Premium postal service within 24 hours from the UK with impressive delivery time. We have dispatched from our book depository; items of good condition to over ten million satisfied customers worldwide. We are committed to providing you with reliable and efficient service at all times. Nş de ref. del artículo: 1709596

2. A Titanic myth: The Californian incident

Descripción S.P.A. in conjunction with L. Ha, 1992. Hardcover. Condición: Good. Connecting readers with great books since 1972. Used books may not include companion materials, some shelf wear, may contain highlighting/notes, may not include cdrom or access codes. Customer service is our top priority!. Nş de ref. del artículo: S_277223539

3. A TITANIC MYTH: The Californian Incident

Descripción The S. P. A. Ltd in Association with Leslie Harrison, Hanley Swan, 1992. Hardback. Condición: Mint. Estado de la sobrecubierta: Mint. Revised Edition. This copy is in mint, unmarked condition bound in black cloth covered boards with bright gilt titling to the spine. This copy is bright, tight, white and square. The unclipped dustwrapper is in mint condition. International postal rates are calculated on a book weighing 1 Kilo, in cases where the book weighs more than 1 Kilo increased postal rates will be quoted, where the book weighs less then postage will be reduced accordingly. Captain of the Californian Stanley Lord was at the time of the sinking of the Titanic officially condemned in the eyes of the world as the man who could have saved all 1,500 of those who perished in the disaster, but who failed to do so, allegedly because of his laziness, incompetence, cowardice or even drunkenness, as some critics have hinted. Two official inquiries were critical of Lord, but did not recommend criminal charges. Subsequent authors have offered differing opinions on Lord's actions, with some defending, and others criticizing him. The passion among the two factions has resulted in the labels of "Lordites" and "Anti-Lordites" being applied to the two camps. Central points of debate typically include the appropriateness of Lord's response to the rockets, whether the Californian and Titanic were in fact visible to one another (and additionally the visibility of the rockets), the possible presence of one or more "Mystery Ships" that may have been the ships seen by either the Titanic or Californian (assuming they did not in fact see each other), and whether or not the Californian could have saved any additional lives had it attempted to render assistance more quickly. Ref MMM 5 Size: 288pp. Nş de ref. del artículo: 025001

4. A Titanic myth: The Californian incident

Descripción S.P.A. in conjunction with L. Harrison, 1992. Condición: Good. A+ Customer service! Satisfaction Guaranteed! Book is in Used-Good condition. Pages and cover are clean and intact. Used items may not include supplementary materials such as CDs or access codes. May show signs of minor shelf wear and contain limited notes and highlighting. Nş de ref. del artículo: 1854211846-2-4

6. A Titanic myth: The Californian incident