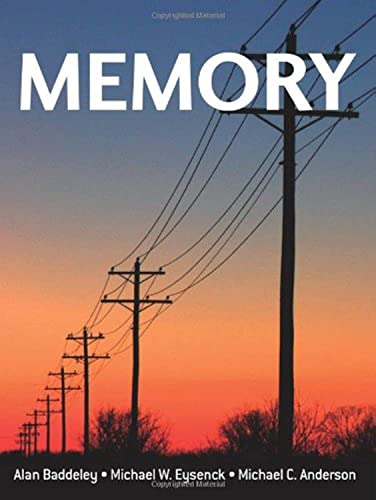 "The style is accessible, with anecdotes and notable case histories much in evidence, and new paradigms often introduced by an example for the reader to try out. The three authors write clearly, and important terminology is glossed. Graphs and charts present plenty of experimental data but are not obtrusive, and the chapter summaries are a helpful length." - Joe Hickey, Assistant Research Psychologist with Suffolk Mental Health Partnership NHS Trust, UK, in The Psychologist

"This book represents an exciting new text on human memory. The authors weave basic research from behavioral studies of memory with the latest in neuroscientific thinking. The writing is accessible and should make it a popular text with students and professors alike. I strongly recommend it." - Henry L. Roediger, III, Washington University in St. Louis, USA

"This excellent book meets a long-standing need for an introductory text in human memory and learning. It has been written in an engaging down-to-earth style and the coverage is absolutely up-to-date yet grounded in classic ideas and observations. Recent work on underlying brain mechanisms is also included. I recommend the book enthusiastically to students and to the interested general reader." - Fergus Craik, Rotman Research Institute and University of Toronto, Canada

"Baddeley, Eysenck and Anderson are among the best known and most widely respected cognitive psychologists internationally. The result of their collaboration is a textbook that is comprehensive and soundly scientific, while remaining engaging and highly accessible to all students of human memory." - Robert Logie, University of Edinburgh, UK

"I do not know of any memory textbook that covers as many aspects of the topic in such a comprehensive and interesting way for a very broad audience." - Lars-Goran Nilsson, Stockholm University and Stockholm Brain Institute, Sweden

"What distinguishes this delightful and informative book from other textbooks is its eclecticism: it places equal emphasis on data and theory, on typical people and clinical populations, on laboratory experiments and real-world applications, and on methodologies and approaches from experimental psychology and cognitive neuroscience. Best of all, the authors have a historical sensibility while being very up-to-date, which gives the reader a good sense of how the field of memory research developed and where it is heading. I recommend the book enthusiastically." - Morris Moscovitch, Professor of Psychology, University of Toronto and Rotman Research Institute, Baycrest Centre for Geriatric Care, Canada

People seem to be intrigued by memory, and by its sometimes spectacular failure in (for example) people with amnesia. However, students of memory sometimes fail to retain this fascination. The reason is clear: in order to study memory we must carry out carefully-designed experiments, which can seem boring even when they are exciting science. Fortunately, we now know enough about memory to relate laboratory studies to the world beyond. In other words, our scientific knowledge of memory and how it works can help us to explain those aspects of memory that most people find of greatest interest.

This book presents a thorough, accessible and appealing overview of the field, written with students in mind, by some of the world's leading researchers. It starts with a brief overview and explanation of the scientific approach to memory before going on to discuss the basic characteristics of the various memory systems and how they work. Summaries of short-term and working memory are followed by chapters on learning, the role of organization in memory, the ways in which our knowledge of the world is stored, retrieval, and on intentional and motivated forgetting.

The latter half of the book involves the broader application of our basic understanding of memory, with chapters on autobiographical memory, amnesia, and on memory in childhood and aging. After chapters discussing eyewitness testimony and prospective memory, a final chapter addresses an issue of great importance to students – how to improve your memory.

Each chapter of the book is written by one of the three authors, an approach which takes full advantage of their individual expertise, style and personality. This enhances students’ enjoyment of the book, allowing them to share the authors’ own fascination with human memory.