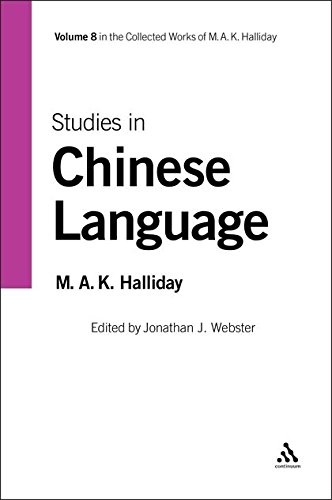 "In this volume, Professor Halliday describes the Chinese language system in terms of categories of grammar, lexis, and phonology, in both medieval and modern Chinese, Putonghua and Cantonese. This lays the foundation of his systemic-functional framework in general linguistics. His pioneering work on probabilistics in Chinese grammar and his observation of grammatical metaphor herald the heyday of contemporary corpus linguistics and text linguistics. Michael Halliday has proved himself worthy of the honour to be recognized as one of the most influential linguists today, and to be ranked along such great names in Chinese scholarship as B. Karlgren, H. Maspero, Chao Yuenren, Luo Changpei, Wang Li, and Lu Shuxiang." Hu Zhuanglin, Tenured Professor, Peking University, China"

Studies in Chinese Language, the eighth volume in the Collected Works of Professor M. A. K. Halliday, approaches the Chinese language from several interesting vantage points, ranging from studies of medieval to modern grammar, phonology, and discourse. Professor Halliday's doctoral thesis, 'The Language of the Chinese, Secret History of the Mongols, provides the basis for the first section of this volume, with extracts from the book as well as the original Chinese text, which is one of the earliest known texts written in Mandarin, included in full on the accompanying online resources. The second section focuses on modern Chinese grammar, while the third looks at Chinese phonology. The final section, Grammar and Discourse', includes papers on grammatical metaphor and scientific discourse in both Chinese and English.