Artículos relacionados a Being Arab 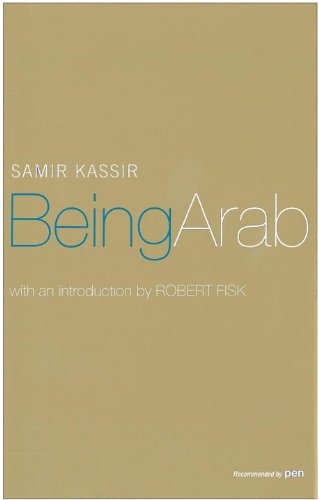 "One of the leading progressives in the Middle East, and one of its bravest voices: an unflagging advocate of democracy, an opponent of Arab dictatorships and of Western double standards, a champion of Palestinian rights who was also a scathing critic of anti-Semitism." - Adam Shatz, The Nation "One of Lebanon's most prominent journalists and one of the most vociferous and bravest critics of the Syrian regime." - Robert Fisk, Independent

This is a passionate meditation on the current crisis in Arab identity. "Being Arab" is an essential book about what it means to be alienated from one's roots, and how to trace back those lines of history. One of Lebanon's most prominent journalist, Samir Kassir describes the state of Arab malaise in which he finds his generation, and searches to understand how the Arab world arrived at this point of political and intellectual stagnation. Kassir turns to the past, recounting the Arab "golden age," the extraordinary flowering of cultural expression in the nineteenth century that continued into the twentieth as, from Cairo to Baghdad and from Beirut to Casablanca, painters, poets, musicians, playwrights and novelists came together to create a new, living Arab culture. Investigating the huge impact of modernity on the region, and the shockwaves that turned society upside-down, Kassir suggests that the current crisis in Arab identity lies in the failure to come to terms with modernity and embracing false solutions such as pan-Arabism and fundamentalism. "Being Arab" is a clarion call, urging Arabs to closely examine their own history, to reject Western double standards and Islamism, and to take the future of the region into their own hands.

Descripción London ; New York : Verso Books, 2006. Hardcover. Condición: New. Estado de la sobrecubierta: New. xiii, 96 pages ; 21 cm Contents: The Arabs are the most wretched people in the world today, even if they do not realize it -- A deep sense of malaise permeates every corner of the Arab world -- The Arab malaise is a period of history and it is now more acute than it was before -- Modernity was not the cause of the Arab malaise -- The Arab malaise is not the result of modernity but of modernity's collapse -- The Arabs' malaise is more a function of their geography than their history -- The worst aspect of the Arabs' malaise is their refusal to emerge from it, but, if happiness is not in sight, some form of equilibrium at least is possible. Nş de ref. del artículo: ewsperl519