Artículos relacionados a Ali and Ramazan 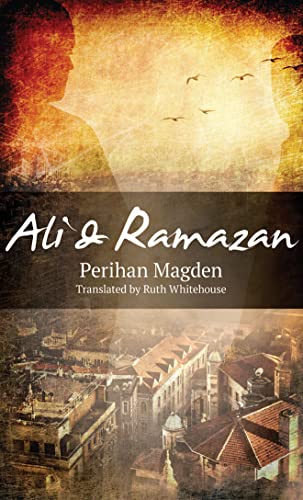 Based on a true story, this novel follows Ali and Ramazan, two boys from very different backgrounds who land in the same Istanbul orphanage. They quickly see eye to eye and fall into a loving relationship as children, bringing light to one another and to the other orphans in their dreary adopted home. Ramazan is a charmer, the school master's unfortunate favorite, the clown among the boys, and the only one with access to the world outside the orphanage's walls. He takes naďve, sweet, and quietly intelligent Ali under his wing, and together they blossom in a world all their own. However, at age 18 they are released into the streets of Istanbul to find their own way without the support of the state. Faced with an unaccepting world in which they have no one but each other, Ali and Ramazan each make choices that cannot be reversed, with tragic consequences.

Born in Istanbul, Perihan Magden has written novels, poetry, and a column in Turkey’s national daily newspaper, Radikal. She is the author of two novels currently available in English, Messenger Boy Murders and 2 Girls, as well as Escape and The Companion. 2 Girls was made into film by director Kutlug Ataman and premiered at the 2005 London Film Festival. Her novels have been translated into eighteen languages, including German, French, Spanish, Italian, Greek, Portuguese, and Dutch. She is an honorary member of British PEN and winner of the Grand Award for Freedom of Speech by the Turkish Publishers Association.

Translator Ruth Whitehouse was first introduced to Turkish language and culture while working as a violinist in Ankara after graduating from the Royal College of Music in London. After her return to London, she focused on her career as a musician and raising two children while still maintaining her interest in Turkey. She went on to complete a BA (Hons) degree in Turkish studies and a PhD in Modern Turkish Literature at the School of Oriental and African Studies. More recently, Ruth has also studied Persian, and she works as a translator from Turkish and Persian into English.