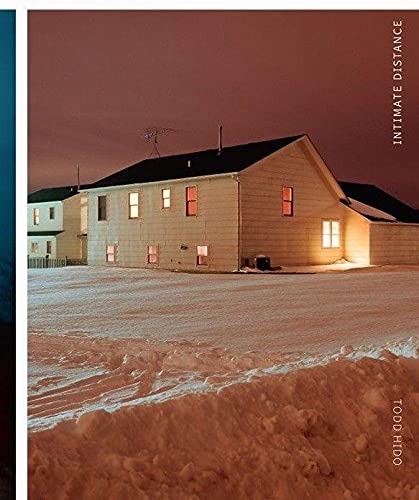 Todd Hido: Intimate Distance is the first comprehensive monograph charting the career of acclaimed American photographer Todd Hido. Though he has published many smaller monographs of individual bodies of work, this gathers his most iconic images for the first time and brings a fresh perspective to his oeuvre with the inclusion of many unpublished photographs. Well-known for his photographs of landscapes and suburban housing across the United States, and for his use of luminous color, Hido casts a distinctly cinematic eye across all that he photographs, digging deep into his memory and imagination for inspiration. David Campany introduces the work and looks specifically at Hido’s cinematic influences and the kind of spectatorship the work demands. The book is organized chronologically, showing how his series overlap in exciting, new ways. Also featured are short interviews with Hido about the making of each of his monographs. From exterior to interior, surface observations to subconscious investigations, landscapes to nudes, this mid-career survey reveals insight into Hido’s practice and illustrates how his unique focus has developed and shifted over time.

Todd Hido (born in Kent, Ohio, 1968) is a San Francisco Bay Area-based artist. His photographs are in the permanent collections of the Whitney Museum of American Art, New York; Solomon R. Guggenheim Museum, New York; San Francisco Museum of Modern Art; and Los Angeles County Museum of Art, as well as in many other public and private collections. He has published over a dozen books, including House Hunting (2001), Roaming (2004), and Excerpts from Silver Meadows (2013). He is an adjunct professor at California College of the Arts. In 2014, Aperture published Todd Hido on Landscapes, Interiors, and the Nude as part of The Photography Workshop Series.

Katya Tylevich is a writer and essayist. She is co-author of the book My Life as a Work of Art (Laurence King, 2016) with Ben Eastham. She is editor-at-large for Elephant, contributing editor for Mark, and contributes to Domus, Pin-Up and Frame among other journals. Her writing appears in books, monographs and exhibition catalogues on topics in art and architecture, including Todd Hido's Excerpts from Silver Meadows and Michaël Borremans' As Sweet as It Gets. With her brother Alexei, she is co-founder of Friend & Colleague, a platform for editions, fiction and special projects.