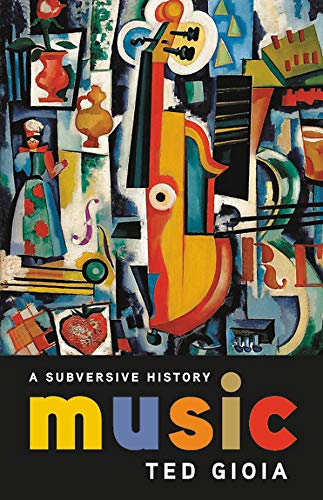 "Gioia draws on social science research into the past and present to forge a sweeping and enthralling account of music as an agency of human change."--Booklist, starred review "Gioia's argument is persuasive and offers a wealth of possibilities for further exploration. This fascinating recontextualization will appeal to anyone who ever wondered why "Hound Dog" became a hit only when Elvis Presley covered it."--Library Journal "In this excellent history, music critic Gioia (How to Listen to Jazz) dazzles with tales of how music grew out of violence, sex, and rebellion... Gioia's richly told narrative provides fresh insights into the history of music."--Publishers Weekly, starred review "A revisionist history highlights music's connections to violence, disruption, and power. In a sweeping survey that begins in "pre-human natural soundscapes," music historian Gioia (How To Listen to Jazz, 2016, etc.) examines changes and innovation in music, arguing vigorously that the music produced by "peasants and plebeians, slaves and bohemians, renegades and outcasts" reflected and influenced social, cultural, and political life... A bold, fresh, and informative chronicle of music's evolution and cultural meaning."--Kirkus "In this meticulously-researched yet thoroughly page-turning book, Gioia argues for the universality of music from all cultures and eras. Subversives from Sappho to Mozart and Charlie Parker are given new perspective -- as is the role of the church and other arts-shaping institutions. Music of emotion is looked at alongside the music of political power in a fascinating way by a master writer and critical thinker. This is a must-read for those of us for whom music has a central role in our daily lives."--Fred Hersch, pianist and composer, and author of Good Things Happen Slowly: A Life In and Out of Jazz "One of the most perceptive writers on music has cut a wide swath down the path of history, illuminating details often left in the shadows and broadening our understanding of all things sonic. Gioia vividly points out that the wheels of cultural advancement are often turned by the countless unsung heroes of inventiveness. A mind opening and totally engaging read!"--Terry Riley "As a fan of 'big histories' that sweep through space and time, I gobbled this one like candy as I found myself astounded by some idea, some fact, some source, some dots connected into a fast-reading big picture that takes in Roman pantomime riots, Occitan troubadours, churchbells, blues, Afrofuturism, surveillance capitalism, and much more. A must for music heads."--Ned Sublette, author of Cuba and Its Music and The World That Made New Orleans "Gioia's sprawling and deeply interesting history of music defies all stereotypes of music scholarship. This is rich work that provokes many fascinating questions. Scientists and humanists alike will find plenty to disagree with, but isn't that the point? 'A subversive history', indeed."--Samuel Mehr, Director, The Music Lab, Harvard University

The phrase "music history" likely summons up images of long-dead composers, smug men in wigs and waistcoats, and people dancing without touching. In Music: A Subversive History, Gioia responds to the false notions that undergird this tedium. Traditional histories of music, Gioia contents, downplay those elements of music that are considered disreputable or irrational-its deep connections to sexuality, magic, trance and alternative mind states, healing, social control, generational conflict, political unrest, even violence and murder. They suppress the stories of the outsiders and rebels who created musical revolutions and instead celebrate the mainstream assimilators who borrowed innovations, diluted their impact and disguised their sources. Here, Gioia attempts to reclaim music history for the riffraff, the insurgents and provocateurs - the real drivers of change and innovation.

In Music, Gioia tells the four-thousand-year history of music as a source of power, change, upheaval and enchantment. He starts by exploring humanity's first instruments, which were closely linked to the food chain: the first horns were animal horns, our earliest string instrument was a hunter's bow and our oldest known instrument, the Neanderthal flute, was constructed from a bear femur. He turns to neuroscience to explain why the Celtic love story of Tristan and Iseult echoes the eleventh century Gorgani Persian love epic about Vis and Ramin, or why the troubadours of Europe echo artisan singers of ancient Egypt. He investigates the idea of "song as sin" as Church leaders for the first thousand years of Christianity attempted to control and suppress the songs of the common people and he explains the shift of music from a social practice to an economic enterprise during the Renaissance. Gioia shows how social outcasts have repeatedly become the great trailblazers of musical expression: slaves and their descendants, for instance, have repeatedly reinvented music in America and elsewhere, from ragtime, blues, jazz, R&B, to bossa nova, soul and hip hop.

A revolutionary and revisionist account, Music: A Subversive History will be essential reading for anyone interested in the meaning of music.