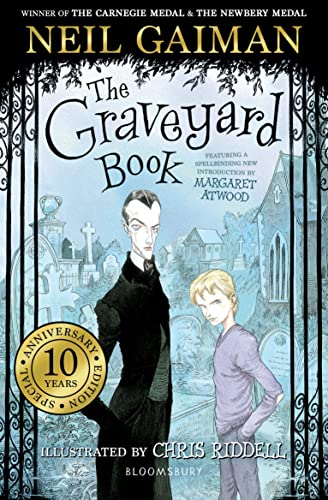 The outrageous riches of Gaiman's imagination. Every page is crowded with invention, both funny and scary (Patrick Ness)

My favourite Gaiman tale, The Graveyard Book's deft combination of darkness and glinting humour will continue to win fans for decades to come (Kiran Millwood Hargrave)

One of the joys of reading Gaiman is how he subverts our expectations of magic, horror, fantasy and the mundane . A memorable, captivating read (The Times)

Endlessly inventive, masterfully told and, like Bod himself, too clever to fit into only one place. This is a book for everyone. You will love it to death (Holly Black)

I wish my younger self could have had the opportunity to read and reread this wonderful book, and my older self wishes that I had written it (Garth Nix)

The Graveyard Book, by turns exciting and witty, sinister and tender, shows Gaiman at the top of his form . In this novel of wonder, Neil Gaiman follows in the footsteps of long-ago storytellers, weaving a tale of unforgettable enchantment (New York Times)

The best book Neil Gaiman has ever written. How he has managed to combine fascinating, friendly, frightening and fearsome in one fantasy I shall never know, but he has pulled it off magnificently (Diana Wynne Jones)

'A captivating piece of work, light as fresh grave dirt, haunting as the inscription on a tombstone (Financial Times)

Ten years after its original publication, behold the bewitching anniversary edition of the classic children's novel The Graveyard Book by Neil Gaiman, printed on luxurious paper, and featuring gorgeous flaps, spellbinding illustrations from Chris Riddell and an exclusive new introduction by Margaret Atwood

'Every page is crowded with invention, both funny and scary' PATRICK NESS
'A tale of unforgettable enchantment' NEW YORK TIMES

Nobody Owens, known to his friends as Bod, is a normal boy. He would be completely normal if he didn't live in a graveyard, raised and educated by ghosts.

There are dangers and adventures for Bod in the graveyard. But it is in the land of the living that the real danger lurks, for it is there that the man Jack lives .