Artículos relacionados a Theory and History of Ideological Production: The First... 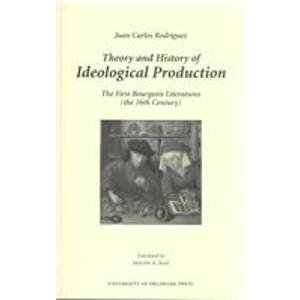 To explain a text, according to Rodriguez, is to locate it precisley at a real historical conjuncture, to situate it ideologically. This insistence on the historicity of literature saved Rodriguez from the fate that, from the late 1970s onward, overtook many Althusserians. The latter, unable to historicise and therefore transcend the key category of the subject, refused to rank 'real art' among the ideologies, as a result of which their concept of literary 'production' remained locked in a Kantian- and therefore eminently bourgeois- problematic. For Rodriguez, in contrast, ideology could not be the discourse of the subject, for the simple reason that the subject was itself an historical category, whose origins were to be found in animism, the ideology of the bourgeoisie during its early, mercantilist phase. As an emergent ideology, animism stood in contradiction to substantialism, its dominant counterpart under feudalism, that manifestly had no place for a 'free subject'. The analysis of these conflictual ideologies, during the protracted transition in Spain from feudalism to capitalism, constitutes the kernel of Theory and History of Ideological Production. Juan Carlos Rodriguez holds the Chair of Sociology of Literature at the University of Granada.