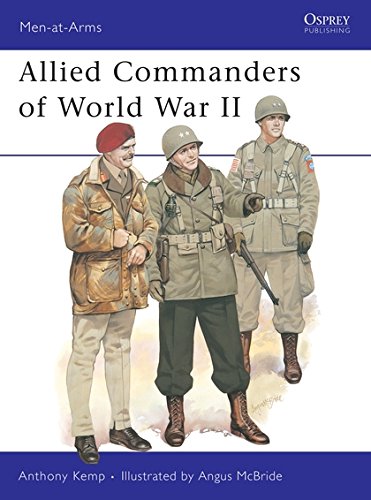 The Second World War, unlike the First, fostered the projection of 'characters'. Thanks to the media, many of the Allied commanders became household names, known as much for their successes and defeats on the battlefield as for their personalities. This book provides a brief review of the careers of some of the most notable figures to achieve high command in the Allied forces, a list that includes General of the Army Omar Bradley, Field Marshal Sir Bernard Montgomery, General George Patton and General of the Army Dwight D. Eisenhower. These characters are brought to life through numerous illustrations, including photographs and colour plates.

Anthony Kemp has a keen interest in the commanders of World War II. In addition to this book, he authored Men-at-Arms 124: German Commanders of World War II. Angus McBride is one of the world's most respected historical illustrators, and has contributed to more than 70 Osprey titles in the past three decades. Born in 1931 of Highland parents but orphaned as a child, he was educated at Canterbury Cathedral Choir School. He worked in advertising agencies from 1947, and after national service, emigrated to South Africa. He now lives and works in Cape Town.