Artículos relacionados a Adapted for the Screen: The Cultural Politics of Modern...

Deppman, Hsiu-Chuang Adapted for the Screen: The Cultural Politics of Modern Chinese Fiction and Film

Adapted for the Screen: The Cultural Politics of Modern Chinese Fiction and Film 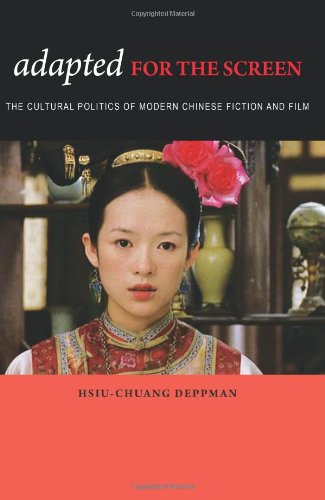 Contemporary Chinese films are popular with audiences worldwide, but a key reason for their success has gone unnoticed: many of the films are adapted from brilliant literary works. This book is the first to put these landmark films in the context of their literary origins and explore how the best Chinese directors adapt fictional narratives and styles for film. Hsiu-Chuang Deppman unites aesthetics with history in her argument that the rise of cinema in China, Hong Kong, and Taiwan in the late 1980s was partly fueled by burgeoning literary movements. Fifth Generation director Zhang Yimou’s highly acclaimed films Red Sorghum, Raise the Red Lantern, and To Live are built on the experimental works of Mo Yan, Su Tong, and Yu Hua, respectively. Hong Kong new wave’s Ann Hui and Stanley Kwan capitalized on the irresistible visual metaphors of Eileen Chang’s postrealism. Hou Xiaoxian’s new Taiwan cinema turned to fiction by Huang Chunming and Zhu Tianwen for fine-grained perspectives on class and gender relations. Delving equally into the individual approaches of directors and writers, Deppman initiates readers into the exciting possibilities emanating from the world of Chinese cinema. The seven in-depth studies include a diverse array of forms (cinematic adaptation of literature, literary adaptation of film, auto-adaptation, and non-narrative adaptation) and a variety of genres (martial arts, melodrama, romance, autobiography, documentary drama). Complementing this formal diversity is a geographical range that far exceeds the cultural, linguistic, and physical boundaries of China. The directors represented here also work in the U.S. and Europe and reflect the growing international resources of Chinese-language cinema. With her sophisticated blend of stylistic and historical analyses, Deppman brings much-needed nuance to current conversations about the politics of gender, class, and race in the work of the most celebrated Chinese writers and directors. Her pioneering study will appeal to all readers, general and academic, who have an interest in Chinese literature, cinema, and culture.

Hsiu-Chuang Deppman is associate professor of Chinese at Oberlin College.

1. Adapted for the Screen: The Cultural Politics of Modern Chinese Fiction and Film

2. Adapted for the Screen: The Cultural Politics of Modern Chinese Fiction and Film [Paperback] Deppman, Hsiu-Chuang