Artículos relacionados a The Correspondence of William James: William and Henry,... 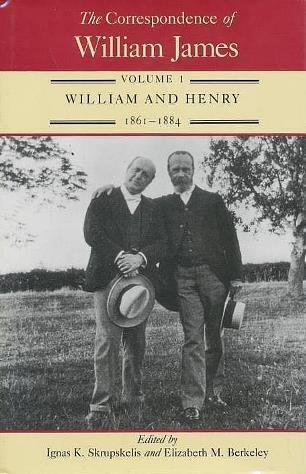 William James, well-known for his contributions to psychology and philosophy, occupies a secure place in American intellectual history. He has been lesser known until now, for his vast correspondence with his brother Henry, members of his family, and with friends, scholars and enthusiasts and detractors among his reading public. "The Correspondence of William James", to be published in 12 volumes, aims to present some 9000 letters, including nearly 7000 by James and 2200 to him. Fewer than 2000 of the letters have previously been published. They represent a breadth of interests - politics, psychology, religion, ethics, his own studies, his brother's writing, family, health and the times in which he lived. The publication of James's private letters completes the material that was begun in "The Works of William James". The first volume of the letters of William and Henry James - the philosopher-psychologist and the master of the modern novel - two geniuses growing up in the one family, is a brilliant display of epistolary moods and temperaments. It reveals the fraternal affections and tensions, their mutual respect and high humour and their ability to quarrel if necessary. The three volumes of this work aim to offer a record of the great (and now fading) age of letter writing and of the contributions of the Jameses, over half a century, to the vital growth of American culture. In volume 1, the letters cover a 23-year period beginning in 1861, when William was 19 and Henry 18, with William going to Cambridge to attend Harvard's Lawrence Scientific School and leaving Henry behind with the family in Newport. The volume ends in 1884 with William married and the father of three children, teaching at Harvard, and at work on "The Principles of Psychology". Henry was established on Bolton Street in London, internationally famous, having just published a 14-volume collection of his novels and tales. It is highly unusual to find two brothers attaining eminence in different fields who throughout their lives were in constant correspondence. Despite Henry's removal to London, the two remained close throughout their lives. The letters in this initial volume recount the struggles of each to begin his career, as well as a range of personal and familial issues. Both travelled extensively, meeting various intellectually and socially prominent persons. Both attended museums, visited and savoured the countryside. Both were anxious to record what they had seen and to impress each other with their literary skills and the breadth of their experience - and did so at great length, in letters that could run to 40 pages, and in contrasting styles. For example, Henry was considered, complex and wordy; William was impulsive, spontaneous and brilliant, writing just as he talked. William gradually evolved as the American visiting Europe as a tourist; Henry gradually merged into the English aristocracy. One of the special features of these volumes is the tracing of that evolution. It is particularly interesting to see the original sources for some of the better-known aspects of both the William-Henry relationship and their relationship, in turn, to other members of the family. The physical and emotional health problems of both brothers are amply documented, including William's recuperation from depression in Europe and Henry's struggles with recurrent ill-health. Especially revealing is their concern for their semi-invalid sister, Alice, and the troubled marriages and failed business venture of their younger brothers, Wilkie and Bob. The death of their eccentric and brilliant father, and the conditions and exclusions of his will, produce the most focused series of letters in the volume. However ambiguously and indirectly, the exchange between William and Henry opens up the competing claims of self-interest and affection, the rivalries and alliances, between and within generations caused by death in any wealthy family, but especially in a family as splendidly quirky as the Jameses. Jean Strouse's widely hailed biography of Alice James, Jane Maher's of Wilkie and Robertson James, and R.W.B. Lewis's recent family biography have acquainted readers with this famous dynasty that can justly claim to be America's "First Family" intellectually. These letters also aim to lend our understanding of the Jameses a depth and a special immediacy.