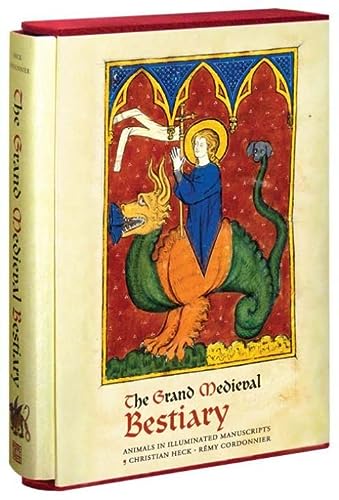 "This is a huge and beautiful book that feels almost like a trip to the Cloisters between two covers." —New York Daily News "Rarely have earnest scholarship and sheer wonder come together as comfortably as they have here. And as magical as the original artworks surely are, this unique volume is literally better than the real thing, since it allows us to ogle them closely." —Fine Art Connoisseur "Every year I try to reserve the adjective "stunning" for one book. This is it." —The Seattle Times holiday gift guide

As the 587 colorful images in this magnificent volume reveal, animals were a constant -- and delightful -- presence in illuminated manuscripts throughout the Middle Ages. Many proto-zoological illustrations, of great charm but variable accuracy, are found in the bestiaries, or compendiums of animal lore, that were exceedingly popular in the twelfth and thirteenth centuries. But animals are depicted in every other sort of illuminated manuscript as well, from the eighth-century Echternach Gospels, with its geometrically schematized symbols of the Evangelists, to the early fifteenth-century Tres Riches Heures du Duc de Berry, with its famously naturalistic scenes of peasant and aristocratic life. In his insightful opening chapters, the noted art historian Christian Heck explains that the prevalence of animals in illuminated manuscripts reflects their importance in medieval thought, an importance due in part to the agricultural society of that age, in which a variety of species--and not just docile pets--were the daily companions of man. Animals also had a greater symbolic significance than they do today: in popular fables, such as those of Reynard the Fox, they held up a mirror to the follies of mankind, and on the religious plane, they were understood as an integral part of God's creation, whose attributes and behaviors could be taken as clues to His plan of salvation. The main part of the book explores the complex and fascinating iconography of the individual creatures most frequently depicted by medieval miniaturists. It is arranged in the manner of a proper bestiary, with essays on one hundred animals alphabetized by their Latin names, from the alauda, or lark, whose morning song was thought to be a hymn to Creation, to the vultur, which enjoyed a certain respect due to its impressive appearance, but whose taste for carrion also made it a symbol of the sinner who indulges in worldly pleasures. The selection includes a number of creatures that would now be considered fantastic, including the griffin, the manticore, and of course the fabled unicorn, tamable only by a gentle maiden. Not merely a study of art history, The Grand Medieval Bestiary uses a theme of timeless interest to present a panorama of medieval life and thought that will captivate even the most sophisticated modern reader.