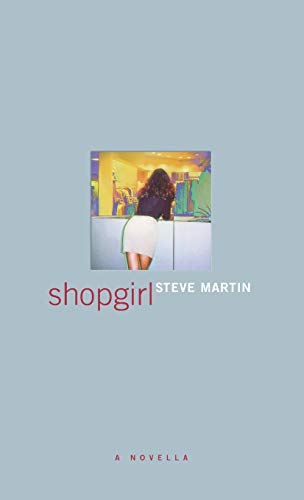 One of the most acclaimed and beloved entertainers, Steve Martin is quickly becoming recognized as a gorgeous writer capable of being at once melancholy and tart, achingly innocent and astonishingly ironic (Elle). A frequent contributor to both The New Yorker and the New York Times as well as the author of the New York Times bestseller Pure Drivel, Martin is once again poised to capture the attention of readers with his debut novella, a delightful depiction of life and love.

The shopgirl is Mirabelle, a beautiful aspiring artist who pays the rent by selling gloves at the Beverly Hills Neiman Marcus. She captures the attention of Ray Porter, a wealthy, lonely businessman. As Ray and Mirabelle tentatively embark on a relationship, they both struggle to decipher the language of love--with consequences that are both comic and heartbreaking. Filled with the kind of witty, discerning observations that have brought Steve Martin incredible critical success, Shopgirl is a work of disarming tenderness.

Steve Martin is a celebrated writer, actor, and performer. His film credits include Father of the Bride, Parenthood and The Spanish Prisoner, as well as Roxanne, L.A. Story, and Bowfinger, for which he also wrote the screenplays. He's won Emmys for his television writing and two Grammys for comedy albums. In addition to a play, Picasso at the Lapin Agile, he has written a bestselling collection of comic pieces, Pure Drivel, and a bestselling novella, Shopgirl. His work appears frequently in The New Yorker and The New York Times. He lives in New York and Los Angeles.