Artículos relacionados a Midnight on the River Grey

Midnight on the River Grey 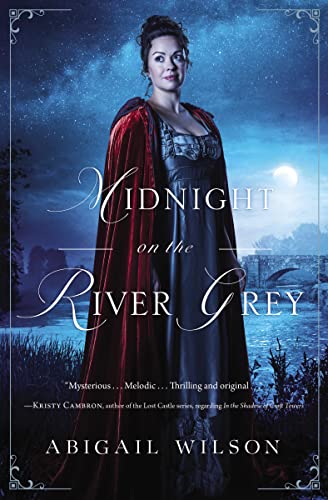 1. Midnight on the River Grey

2. Midnight on the River Grey (Paperback)

Descripción Thomas Nelson Publishers, United States, 2019. Paperback. Condición: New. Language: English. Brand new Book. In this Gothic Regency romance Rebecca fears she has developed feelings for the man she swore to see hanged, her brother's murderer.After her brother's mysterious death, Rebecca Hunter vows to expose the man she believes responsible: Mr. Lewis Browning-known by the locals as the Midnight Devil and by Rebecca as her new guardian.Summoned to his reclusive country estate to await her London season, Rebecca plans her own secret investigation among the darkened corridors of the mysterious Greybourne Hall. Yet Lewis Browning is not as she once imagined, and his motivation is horribly unclear. Recurrent nightmares and Rebecca's restless feelings are further complicated by the shadow of her mother's prior descent into madness and wondering if she, too, will follow the same heartbreaking path.Even as midnight rides, strange injuries, and further murders lead back to Mr. Browning, Rebecca can't ignore the subtle turn of her heart. Has she fallen for the man she swore would pay for her brother's death? And moreover, can she trust him with her uncertain future?Praise for Abigail Wilson:"In the Shadow of Croft Towers is everything I love in a novel: a classic gothic feel, a regency setting, a mysterious hero . . . and secrets abounding!" -Dawn Crandall, award-winning author of the Everstone Chronicles series"Shades of Gothic romance in a portrait of Regency England . . . if Jane Austen ever met Jane Eyre, it would be at Croft Towers!" -Kristy Cambron, author of Castle on the Rise, of In the Shadow of Croft Towers"Blending the unputdownable Regency flair of Georgette Heyer with the intricate plotting of Julie Klassen, Wilson not only places herself competently amidst beloved authors but carves out a unique place of her own." -Rachel McMillan, author of the Van Buren and DeLuca Mysteries"Beautifully written, suspenseful, and satisfyingly romantic." -Jennifer Beckstrand, author of Home on Huckleberry Hill"Murder is far from no one's thoughts in this delicious new romantic mystery from Abigail Wilson. With scandal dodging every turn of the page, mystery hiding behind the visage of each character, and a romance brewing with an English rake of the worse-and best-sorts, readers will find nothing lacking! I was entranced, mesmerized, addlepated, and not a little bit bewildered as I wandered the halls of Middlecrest Abbey." -Jaime Jo Wright, author of the Christy Award-winning novel, The House on Foster HillFull-length Regency romance with a murder mystery (c. 90,000 words)Perfect for fans of Sarah Ladd, Deanna Raybourn, Julie Klassen, Tasha Alexander, and Lauren WilligAlso by Abigail Wilson:In the Shadow of Croft TowersMasquerade at Middlecrest AbbeyThe Vanishing at Loxby Manor (available January 2021)Includes discussion questions for book clubs. Nş de ref. del artículo: AA89780785224129

3. Midnight on the River Grey

4. Midnight on the River Grey

5. Midnight On The River Grey

6. Midnight on the River Grey

7. Midnight on the River Grey

8. Midnight on the River Grey (Paperback)

Descripción Thomas Nelson, 2019. Paperback. Condición: New. Paperback. Can one develop feelings for the man you swore to see hanged That's just what Rebecca fears she has done in this Gothic Regency romance. After her brother's mysterious death, Rebecca Hunte.Shipping may be from multiple locations in the US or from the UK, depending on stock availability. 336 pages. 0.270. Nş de ref. del artículo: 9780785224129

9. Midnight on the River Grey

10. Midnight on the River Grey