Artículos relacionados a Harry Potter and the Deathly Hallows. The seventh book

Harry Potter and the Deathly Hallows. The seventh book 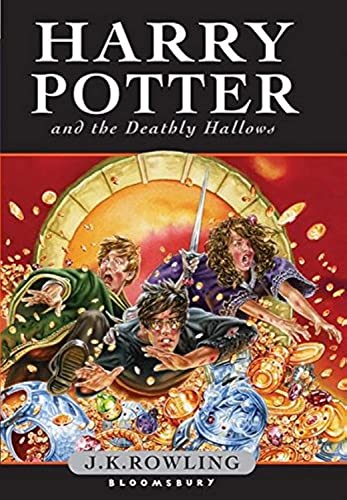 Harry Potter and the Deathly Hallows

"'Like the rest of the world, I have to know what happens next.' Kate Saunders, New Statesman"

'His hand closed automatically around the fake Horcrux, but in spite of everything, in spite of the dark and twisting path he saw stretching ahead for himself, in spite of the final meeting with Voldemort he knew must come, whether in a month, in a year, or in ten, he felt his heart lift at the thought that there was still one last golden day of peace left to enjoy with Ron and Hermione.' With these words Harry Potter and the Half-Blood Prince draws to a close. And here, in this seventh and final book, Harry discovers what fate truly has in store for him as he inexorably makes his way to that final meeting with Voldemort. In this thrilling climax to the phenomenally bestselling series, J.K. Rowling will reveal all to her eagerly waiting readers.

Descripción Gebundene Ausgabe. Condición: Neu. Neu Neuware, Importqualität, auf Lager, Sofortversand -Harry has been burdened with a dark, dangerous and seemingly impossible task: that of locating and destroying Voldemort's remaining Horcruxes. Never has Harry felt so alone, or faced a future so full of shadows. But Harry must somehow find within himself the strength to complete the task he has been given. He must leave the warmth, safety and companionship of The Burrow and follow without fear or hesitation the inexorable path laid out for him. In this final, seventh installment of the Harry Potter series, J.K. Rowling unveils in spectactular fashion the answers to the many questions that have been so eagerly awaited. The spellbinding, richly woven narrative, which plunges, twists and turns at a breathtaking pace, confirms the author as a mistress of storytelling, whose books will be read, reread and read again. 608 pp. Englisch. Nş de ref. del artículo: INF1000351039

Descripción Hardcover. Condición: New. Estado de la sobrecubierta: New. 1st Edition. Hardback. BRAND NEW. Book Condition: NEW. Dust Jacket Condition: NEW. First Edition, First Impression. Never been read. 607 pp. INEXCELLENT CONDITION. PLEASE CONTACT US BEFORE ORDERNG THIS BOOK TO CONFIRM BOOK CONDITION. Shipping is normally same day from the UK. "UK BASED SELLER ALL OVERSEAS SHIPPING VIA AIRMAIL". If you do not want this service please make it clear to Abebooks you wish by Ship. In Stock.- THANKS! We do not stock Ex-Library or Book Club editions. We offer a money back guarantee if you are not fully satisfied, please contact us if you have any questions. Bookseller Inventory #O. 20180917_1648. / 20180917_1646_1. F. Nş de ref. del artículo: 005653

Descripción Hardcover. Condición: New. Estado de la sobrecubierta: New. 1st Edition. The seventh and final volume in the seminal "Harry Potter" series is here personally signed by the Author. Signed at the midnight signing event at the Natural History Museum in July 2007 it bears the all important hologram from the day together with other ephemera and memorabilia from the signing including the "goodie bag" and the invitation to the event which I had the pleasure of being invited to. Unusually, and most importantly, it is not signed to any individual, just the all important J.K.Rowling autograph. This first edition is in mint condition and is unread. I genuinely believe that of the 1700 books that were signed by J.K.Rowling that night, this is one of the very few that was not inscribed to an individual and as such is one of the rarest in the world. Signed by Author(s). Nş de ref. del artículo: ABE-1634653188722