ArtŪculos relacionados a Music and Musicians in Nineteenth Century Italy 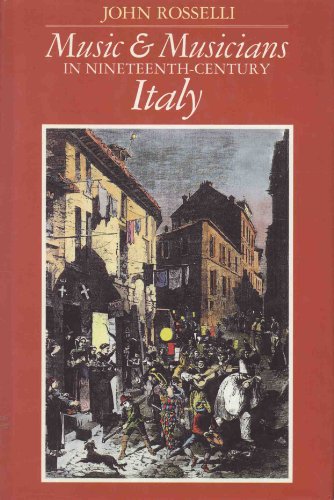 ReseŮa del editor:
This book presents a grassroots view of the daily musical life of the Italian people throughout the 19th century. The author demonstrates that Italians of all walks of life, from Sicilian fisherfolk to Venetian aristocrats, shared a common and eclectic musical tradition that ranged from the rustic shepherd's pipe tunes to the greatest opera arias. This book deals with such questions as: how did ordinary people learn such music, how were musicians trained and organized, how true is it that the Italians were wholly taken up with opera, a supposedly popular and nationalistic art? Some of the conclusions of this book are that folk music in the period remained fragmented, with little notice taken of it by the educated, but that art music was unified even when the country was split up into small states. Unity and continuity were ensured, first by a strongly traditional musical profession, based on family and apprenticeship and on craft methods of work, and secondly by musicians' ceaseless travels along a circuit that took in not only many Italian towns, but also many European and American towns under Italian influence. This traditional world was severely shaken by the political and economic changes of mid-19th century. With exceptions like semi-commercial Neopolitan song, Italian music became more European and less distinctively Italian.