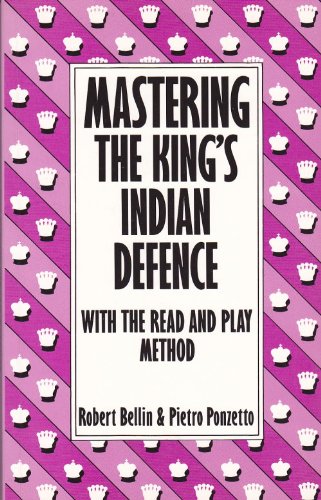 The King's Indian Defence is a combative, fighting opening, in which a player who only memorizes variations will soon lose his way. In this book the authors adopt a new approach to studying the openings by arranging their material according to positional themes, plans and pawn structures. In this way, the reader's understanding of the opening will allow him to find the right move no matter what the opponent comes up with. Robert Bellin is International Master and former British Champion. Pietro Ponzetto is Italian Master and chess trainer.

Descripción B.T. Batsford Ltd. Paperback. Condición: Very Good. A copy that has been read, but remains in excellent condition. Pages are intact and are not marred by notes or highlighting, but may contain a neat previous owner name. The spine remains undamaged. At ThriftBooks, our motto is: Read More, Spend Less. Nş de ref. del artículo: G0713457171I4N00

Descripción Batsford Ltd, 1990. Condición: Good. A+ Customer service! Satisfaction Guaranteed! Book is in Used-Good condition. Pages and cover are clean and intact. Used items may not include supplementary materials such as CDs or access codes. May show signs of minor shelf wear and contain limited notes and highlighting. Nş de ref. del artículo: 0713457171-2-4