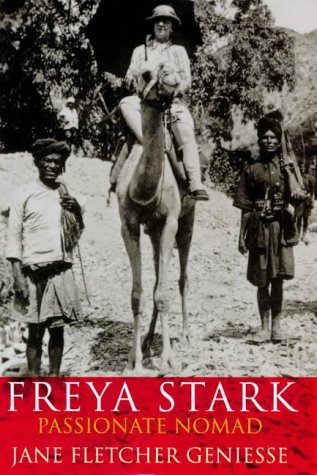 Worn dust jacket has a faded spine and is in a protective sleeve, page edges tanned. Shipped from the U.K. All orders received before 3pm sent that weekday.

Fluent in at least seven languages, including Arabic, Turkish and Persian, and a writer of ravishing prose accounts of her journeys, Freya Stark was one of the great travel writers of the century. In 1934 her first book, "Valley of the Assasins", was hailed as a classic and T.E. Lawrence pronounced her "a gallant creature, a remarkable person". It marked the beginning of a dazzling career as writer, explorer, and unofficial diplomat which led her to explore ancient trading routes of the Yemen desert, Crusaders' castles in Syria, and Alexander the Great's path through Turkey. She frequently travelled, alone and female, through dangerous and uncomfortable territories and was, on one occasion rescued by the Royal Air Force. During World War II, she worked hard to win Islamic people to the Allied cause and toured the United States for the British Ministry of Information. By this time her fame was considerable and her conversation attracted a hugely diverse social circle to her hilltop Italian home. She continued to travel and write widley well into her old age - climbing in the lower slopes of Mount Everest in her late 80s - and lived to reach 100, leaving a legacy of over 30 volumes of travel writings, autobiography and letters.. NOTA: El libro no está en espańol, sino en inglés.

Descripción Chatto and Windus, 1999. Hardcover. Condición: Used; Good. **Simply Brit** Shipped with Premium postal service within 24 hours from the UK with impressive delivery time. We have dispatched from our book depository; items of good condition to over ten million satisfied customers worldwide. We are committed to providing you with reliable and efficient service at all times. Nş de ref. del artículo: 1051548

Descripción Chatto & Windus, 1999. Condición: Good. This is an ex-library book and may have the usual library/used-book markings inside.This book has hardback covers. In good all round condition. Dust Jacket in good condition. Please note the Image in this listing is a stock photo and may not match the covers of the actual item,950grams, ISBN:9780701137106. Nş de ref. del artículo: 8413549

Descripción Hardback. Condición: Very Good. The book has been read, but is in excellent condition. Pages are intact and not marred by notes or highlighting. The spine remains undamaged. Nş de ref. del artículo: GOR001891464

Descripción Hardback. Condición: Good. The book has been read but remains in clean condition. All pages are intact and the cover is intact. Some minor wear to the spine. Nş de ref. del artículo: GOR001761550

Descripción Chatto & Windus, 1999. Condición: Good. 1st. Ships from the UK. Former Library book. Shows some signs of wear, and may have some markings on the inside. Nş de ref. del artículo: GRP28070695