Artículos relacionados a This Is Memorial Device

Keenan, David This Is Memorial Device

This Is Memorial Device 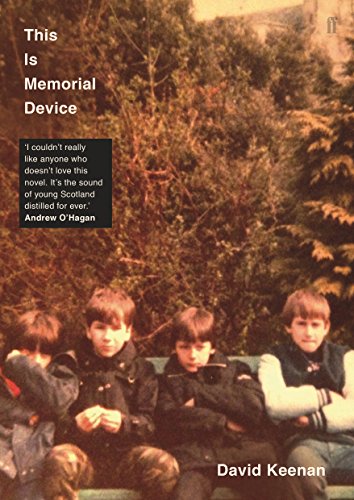 I've never read a book quite like this. It hits all the reflex points one after another in quick succession ... David's book is such a rich, fun, honest, tender and rare gift, everyone should read it. (Cosey Fanni Tutti)

Dream-shaped, intoxicating and brilliant. A hymn to small town energy and intelligence. An anthem for 'shroomed youth.' --(John Niven)

I couldn't really love anybody who doesn't like this book. It's the sound of young Scotland distilled forever. --(Andrew O'Hagan)

Compelling, funny, furiously particular and often profound, This Is Memorial Device is a mysterious micro-curation of a novel; a psycho-geography, a mythical ecosystem, pulsing on its on terms, no doubt, much like Airdrie itself - and thus like every place. --(Alan Warner)

SHORTLISTED FOR THE GORDON BURN PRIZE 2017 ONE OF THE TELEGRAPH'S BEST BOOKS OF 2017 ROUGH TRADE BOOK OF THE MONTH LRB BOOK OF THE WEEK CAUGHT BY THE RIVER BOOK OF THE MONTH 'Beautifully believable and appallingly sad ... One of the most acute, affecting and aphoristic novels of recent years ... A hallucinatory and haunting vision.' (The Guardian) This Is Memorial Device, the debut novel by David Keenan, is a love letter to the small towns of Lanarkshire in the west of Scotland in the late 1970s and early 80s as they were temporarily transformed by the endless possibilities that came out of the freefall from punk rock. It follows a cast of misfits, drop-outs, small town visionaries and would-be artists and musicians through a period of time where anything seemed possible, a moment where art and the demands it made were as serious as your life. At its core is the story of Memorial Device, a mythic post-punk group that could have gone all the way were it not for the visionary excess and uncompromising bloody-minded belief that served to confirm them as underground legends. Written in a series of hallucinatory first-person eye-witness accounts that capture the prosaic madness of the time and place, heady with the magic of youth recalled, This Is Memorial Device combines the formal experimentation of David Foster Wallace at his peak circa Brief Interviews With Hideous Men with moments of delirious psychedelic modernism, laugh out loud bathos, and tender poignancy.

1. This Is Memorial Device

Descripción Paperback. Condición: Very Good. The book has been read, but is in excellent condition. Pages are intact and not marred by notes or highlighting. The spine remains undamaged. Nş de ref. del artículo: GOR008103760

2. This Is Memorial Device

Descripción Faber & Faber. Condición: Good. A+ Customer service! Satisfaction Guaranteed! Book is in Used-Good condition. Pages and cover are clean and intact. Used items may not include supplementary materials such as CDs or access codes. May show signs of minor shelf wear and contain limited notes and highlighting. Nş de ref. del artículo: 0571330835-2-4

3. This Is Memorial Device: An Hallucinated Oral History of the Post-Punk Music Scene in Airdrie, Coatbridge and environs 1978#1986

Descripción Faber & Faber 2017-03-28, 2017. Paperback. Condición: Good. Item is in good condition. Some moderate creases and wear. This item may not come with CDs or additional parts including access codes for textbooks. Might be an ex-library copy and contain writing/highlighting. Nş de ref. del artículo: DS-0571330835-3

4. This Is Memorial Device