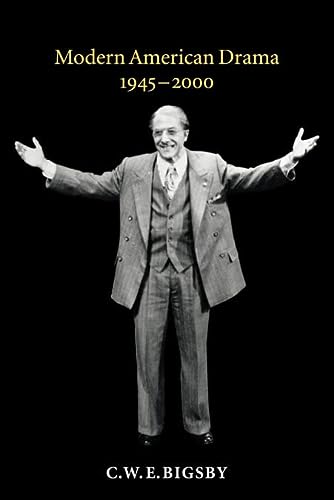 In this new edition of Modern American Drama, Bigsby completes his survey of postwar theatre and brings the reader up to 2000. While retaining the key elements of the first edition, Bigsby also explores works by relatively new playwrights Paula Vogel, Tony Kushner, and Terrence McNally among others.

From the first edition: 'This is both a biographical history of the American playwrights treated, and a highly perceptive factual rendering of the development of American drama in the past half century. I believe it will be invaluable both for its insights into plays and authors and the interplay of social forces working through them ... Bigsby has, in effect, read the evolving American spirit through its theatre. It is a work of enormous encyclopaedic breadth, reaching out into the myriad byways of American theatre, encompassing all its styles and approaches, but always with an eye to the central preoccupation of all serious theatre, the nation's mysterious soul.' Arthur Miller

Descripción Soft cover. Condición: New. 2nd Edition. Beautiful, new, unread copy. All our books at the moment are reduced so the price you see reflects our 25% SALE. YES! If this is intended as a gift, please email first and I can gift wrap for no extra charge. If you would like special delivery but don?t see an option for it, just email first and I?ll obtain a quote. If you have any questions, require more information or if you would like more pictures, do not hesitate to get in touch. Nş de ref. del artículo: 000266

Descripción Paperback. Condición: New. 2nd Revised edition. Language: English. Brand new Book. In this new edition of the widely-acclaimed Modern American Drama, Christopher Bigsby completes his survey of postwar and contemporary theatre and brings the reader up to 2000. While retaining the key elements of the first edition, including surveys of those major figures who have shaped postwar American drama, such as Eugene O'Neill, Tennessee Williams, Arthur Miller, Edward Albee, David Mamet, and Sam Shepard, Bigsby also explores the most recent works and performances: these include plays by established dramatists such as Miller's The Ride down Mount Morgan and Albee's Three Tall Women, as well as works by relatively new playwrights Paula Vogel, Tony Kushner, and Terrence McNally among others. Bigsby also provides a new chapter, 'Beyond Broadway' and offers an analysis of how theatre has formed and influenced the millenial culture of America. Nş de ref. del artículo: AAV9780521794107